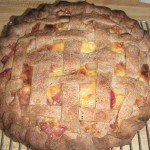 When I first learned how to make pie crust from scratch, I made a plain rhubarb pie, then invited all my friends over for a taste.  They were hooked, but the next time I made a rhubarb custard pie, which everyone liked even better. After that, all I had to do was say “rhubarb,” and they dropped everything to have a piece of my pie. I have come to love the custard version so much that I rarely make the plain version.

A related option would be to make a rhubarb cobbler, using stewed rhubarb and adding a cobbler topping.

While my fav rhubarb custard pie recipe was locked up in my Portland storage locker, I searched the web for a version that would be similar. This recipe is the best version I found, and is adapted from rhubarbinfo.com (1) and Putman Place, Rhubarb Tips and Recipes (2).  Since I’m avoiding sugar, I use mostly stevia, with a bit of maple syrup or honey.

As it turns out, after adjusting the original recipe per repeated testing (see below the recipe), I love this version so much that I don’t miss my old recipe.

Pie Crust: Before I learned about presoaking flour, I used American Pie Crust (Wheat or Spelt) for 1- or 2-crust pie. But now I use Yogurt Pie Crust II (Wheat or Spelt). See also Assembly Version I – III below for alternative arrangements.

Sweetener: original recipe called for 2 cups (9″ pie ) or 1 ½ cups (8″ pie) Rapadura  or white cane sugar, but I’ve adapted it to use honey and stevia.  As an alternative you could use xylitol.

Ingredients & Equipment for 8″ or 9″ pie

Testing 5/31/08:  Followed rhubarbinfo.com (1)  to make 9″ pie using 2 cups cut rhubarb.  Substituted ½ tsp stevia extract powder and 1 tsp maple syrup instead of 1 cup sugar.  Crust was 2-crust American Pie Crust (Spelt), chilled  before rolling.  The balls were too stiff to roll, so I had to let them warm a bit.  It does help to use waxed paper when rolling.  I assembled the pie as for Version I below (lattice upper crust).  Result:  The crust was delicious, if it did fall apart and let the juices seep through so it stuck to the pan.  The filling was quite tart, with not enough rhubarb.  I don’t think rhubarb was quite ripe.  Suggestions for next time: use more and riper rhubarb; more sweetener; don’t chill crust.

6/5/08:  Used American Pie Crust (Spelt) 2-crust recipe. Followed Putman Place (2), except used ¾ tsp stevia and 3 Tbsp honey, and used white spelt flour for thickener.  Omitted nutmeg.  Let rest for a few minutes after mixing, for stevia to mix.  This rhubarb was more ripe than for the 5/31 test.  For crust I used same 2-crust whole spelt recipe, but used half white spelt, half whole spelt.  Added 4 Tbsp water (probably would have been better with 3 ½ Tbsp).  Arranged as 2- crust with vents (version II, below), because I was too lazy to weave the lattice.  Result:  crust is flaky and light, and didn’t let the juices seep through (no sticking to pan).  Filling is tart-sweet, just like I like it. I updated recipe with changes. Conclusion/Suggestion:  the Putman Place recipe is much better, but I like the extra cream of the rhubarbinfo.com recipe, so next time I’ll use more cream in the custard as indicated in note.

5/25/10: Tested as written except used Yogurt Pie Crust II (Spelt) for the crust; used whole milk instead of cream; used 4 tsp arrowroot powder instead of 4 Tbsp flour as thickener. Forgot to dot with butter before adding top crust. I forgot to record the result

5/6/12: Tested as written for 9” two-crust pie with vents see below), except used Yogurt Pie Crust II (Spelt) (soaked flour) for the crust, using 1 ½ cup whole spelt, ¾ cup unbleached white wheat flour; used 3 Tbsp cream as written; used maple syrup instead of honey; used only ½ tsp stevia; omitted nutmeg. Sprinkled top crust with Rapadura sugar, but forgot to brush with milk first, so did that after it had baked 25 min. Baked at 400 for 48 min, total. Result: crust is very flavorful & flakey. Filling is a bit tart – I like it that way but I think most people would like it sweeter, which would mean using ¾ tsp stevia as in original recipe.

This is adapted from Pillsbury Dessert Cookbook, copyright 1970 by The Pillsbury Company (3) and is the first rhubarb pie I made. I does not include the custard.

This recipe is from Putman Place, Rhubarb Tips and Recipes (2).  I have not altered it to use more healthful ingredients; nor have I tested it.

NOTE on PIE CRUST:  See Assembly Version I – III below for alternative arrangements.

My favorite way to assemble the custard pie is with a lattice on the top (see photo at top of this post). Roll crust into two circles, one slightly larger than the other.  Fit the larger circle into the pie pan, pressing against edges.  Cut the smaller circle into 1/2″ lattice strips, which are then woven:

The strips are then brushed with milk and sprinkled with sugar before baking the pie.

Press a portion of a crumb crust (for example, my Pâte Brisée (Short or Crumb Crust) recipe) into the bottom and sides of the pan, and then sprinkle the remaining crumb crust over the top before baking.