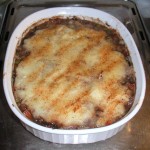 It’s called Shepherd’s Pie because the sheep herders make it using leftover mutton or lamb roast. When you use roast beef, it’s called ‘Cottage Pie;’ I do not recommend using ground lamb or beef for this traditional dish; it is much better (and less fatty) to cube leftover roast, as was done in more agrarian times.

This is a fairly quick and easy recipe with just a little bit of prep to slice/cube the veggies and meat.

Other sources of cooked meat for the pie:

If you use wine for the roast and make a sauce from the deglazing liquids, save some of the sauce to add to the sauce in the pie.

This recipe is adapted from the Irish Heritage Cookbook, by Margaret M. Johnson. I usually make a half recipe if it’s just for me, and I only have about 1/2 cup of cubed roast left over.

Also, I’ve found it helps to double the amount of cream for the mashed potatoes (to 4 Tbsp for full recipe), which makes it easier to spread them over the casserole.

As indicated in the recipe, I like to save the cooking water (from the potatoes and the carrots), and the cooked potato peels, to make Potato Peel Broth.  This is very rich with minerals, and quite tasty.