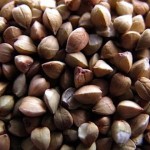 On this site, I refer to ‘buckwheat’ when I mean the raw grain (not toasted or roasted), but may be cooked; and to ‘kasha’ when I mean the sprouted or toasted/roasted grain. Sally Fallon’s Nourishing Traditions recipe for kasha is sprouted and dried, rather than toasted/roasted, and is thus more healthful; see Buckwheat & Kasha (About) for my adaptation of her method.

The following is from The Whole Family: Warm up with Buckwheat. This recipe reflects the generally accepted 2:1 water to buckwheat ratio for cooking.

You can start with raw or sprouted & dried buckwheat groats and toast them before cooking, or start with roasted kasha and skip the toasting part. Not yet tested.

Here’s another version, adapted from aSiteAboutNothing.com, that bakes in the oven. It uses less liquid for the same amount of buckwheat/kasha than the above version – may need more water. I’ve not yet tested this recipe.

This is similar to the way I cook brown rice (except I don’t toast the rice first). I used to put the rice into the oven after combining with the water, but now I cook it in a double boiler over a simmer plate on top of the burner, about 45 minutes.

NOTE about equipment: For this version, you’ll need a stovetop heavy-bottomed saucepan and an ovenproof casserole with lid. Ideally you have a saucepan that can be used both on stovetop and in the oven, such as CorningWare; or if making a large quantity, you could use a cast iron Dutch oven.

See my 'About' page
View all posts by Cat →
This entry was posted in Grain, Roasted, Simmered, Steamed and tagged buckwheat, kasha, simmered. Bookmark the permalink.