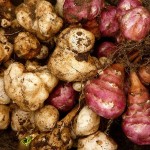 Fiber is a type of carbohydrate for which we do not make enzymes needed to break down the chains of sugars. Instead, the bugs in our gut break down some types of fiber, such as inulin and FOS (other types are flushed out with our stool). Inulin and FOS are made up of chains of fructose (fructose-saccharides or fructans); inulin has longer chains of varying length, while FOS have shorter chains of known length, and are often synthetic.

One morning in 2008, I was adding Jerusalem Artichoke to my Root Veggies (About) article, when the proverbial light bulb lit up.  I’d been making a smoothie every morning since the mid-90s, and a few months ago, I started adding fructo-oligo-saccharide (FOS) crystals to my morning smoothie at my doctor’s suggestion, to support growth of beneficial probiotic colonies in my gut, and to help control my insulin resistance.  I prefer not to get my foods from refined sources, but did not know how to add FOS as whole foods. And then came the light bulb:  “A-Ha! I could use the humble Jerusalem artichoke in my smoothie!  Or dandelion root.”  Or less-refined supplemental inulin.

Before discussing inulin, it might be helpful to read my article: Carbohydrates: a Review.

I have a printable (pdf) version of this article: “inulin-carbs-2019b.pdf” (title is Inulin: Non-Starchy Carbohydrate (Fiber)). (Saved in HEALTH-NUTRITION>DIET). I’ve not added a link here because I’m running out of space in my account. If you’d like a copy, please contact me and I’ll send it to you.

This is a fairly common form of fiber comprised of chains of fructose, and some may be linked to other sugars such as sucrose. They may be straight or branched chains. Fructans are found in:

The most well-known fructans are the inulins, which include (10):

Another common type of fructans are agavins (from the agave family) (10).

Humans lack the enzymes to digest and absorb fructans, so they fall into the larger class of carbohydrates known as “fiber.”  Inulins would pass through our digestive tract and out in our stool intact, were it not for the good bacteria (probiotics) in our large intestine, who, rather than breaking them down into simple sugars, ferment them into non-sugar products we can absorb, as well as a bit of gas (carbon dioxide, hydrogen, and/or methane).  If you are not used to eating inulin-rich foods, go easy at first.

Digestion of all fructans happens by the effort of certain probiotic bacteria in our gut, primarily the bifidobacteria, which makes inulin a prebiotic (means “foods for probiotics”). The good bugs in your gut break down fructans by fermentation to short-chain fatty acids (SCFA) such as butyric acid (or butyrate). By consuming fructans, you help increase the population of bifidobacteria (an important good bug) in the colon.

For purposes of my discussion, I will refer to both Inulin and FOS (fructo-oligo-saccharides) as “Inulin,”  unless I wish to make a distinction. The shorter-chain FOS molecules are 30 – 50% as sweet as table sugar.  The longer chain inulin, is not particularly sweet, but has a pleasant feel in the mouth which can be described as “sweet” or “creamy.”  For this reason, different forms of inulin are being used increasingly as food additives in processed foods to mimic the missing sugars in low-carb foods, or the missing fats in low-fat foods (2A).

The inulin is fermented to produce short chain fatty acids (SCFA), which we can absorb.  These SCFA are:

Both acetic and propionic acid can be used by the liver for energy production and detoxification; butyric acid has cancer-preventing properties within the intestine, among many other benefits. (1)

Commercial and supplemental inulin/FOS is a highly refined, crystalline substance.  But these fructans can be found in certain foods (a much better source than supplements), most particularly roots and rhizomes, such as jerusalem artichoke, chicory, dandelion, and garlic.

Unfortunately, inulin and FOS can also be food for some bad bugs; for example:  Klebsiella.  Normally Klebsiella resides in the large intestine without causing problems.  However, certain conditions (such as systemic candida infection) can allow it to migrate into the small intestine, where it can wreak havoc on the intestinal mucosa, and result in a condition known as “leaky gut.” (1)

It is important to watch for signs of gut flora imbalance, especially if you take FOS supplementally. If the following sure signs of an imbalance apply to you, avoid foods and supplements with added FOS, because it may also feed the bad bugs in your gut, worsening the symptoms. (8). These signs include:

Side effects of FOS consumption include flatulence, bloating, cramps, abdominal discomfort and pain, and diarrhea, especially when taken at doses of 15 grams or more per day. These symptoms result from hydrogen and carbon dioxide given off by the breakdown of the inulin/FOS chains. (8)

However, as mentioned earlier, start slowly and watch for signs of gut flora imbalance. You may need to deal with that issue before you can restarting inulin sources. Also remember that food sources will be more gentle than supplemental sources.

See also “Who should avoid inulin,” below.

Inulin in the Diet

First off, I’d like to say that it is probably best to avoid so-called “functional foods containing inulin,”  processed foods to which inulin has been added (or from which it has been processed and refined) so that certain health claims can be made.  FOS supplements should also be avoided, as most have been industrially manipulated to alter fructan chain length. (5)

Many natural foods contain inulin, and it is probably a good idea to include them in your diet, 1-3 days per week; remember to start slowly. (3, 5)

+ These sources have the highest concentration of inulin by % of fresh weight. (6)

Globe artichokes (the kind we are used to eating) also produce inulin in their roots, but they are unrelated to Jerusalem artichokes (globes are a thistle, Jerusalems are a sunflower). They stimulate liver activity by promoting circulation within the liver, protecting glutathione, and assisting in formation of bile acids.

Jarrow Formulas offers globe artichoke extract in capsules that can be taken as a supplement (see iHerb, product ID JRW-14062). However, I still recommend food sources, and remember to start slowly and watch for signs of gut flora imbalance. See also “Who should avoid inulin,” below.

Who should avoid inulin

If you are FODMAP Intolerant, you should avoid inulin, especially as a supplement. FODMAP means certain types of foods that contain “Fermentable Oligosaccharides, Disaccharides, Monosaccharides And Polyols”) – in other words, fermentable sugars, starches and fibers. (9)

FODMAPS, including FOS and disaccharides, are short-chain carbohydrates that are difficult for some people to digest. Instead, they’re fermented by your gut bacteria, causing gas, pain, bloating and diarrhea.

FODMAPs are found in many foods and include lactose in some dairy, fructose, galactans (found in some legumes), polyols (found in sweeteners like xylitol, sorbitol, mannitol and maltitol*) and fructan (i.e. inulin).

Most people digest FODMAPs with no problem, but if you have gut problems, particularly irritable bowel syndrome (IBS), FODMAPs may be problematic for you.”

‘* Xylitol, sorbitol and mannitol all have 6-carbons; maltitol has 12 carbons; all have sweetness between 30% (lactitol) and 100% (mannitol) of that of table sugar, and can substitute for sugar in all recipes except those that require caramelization (browning). 3b

See my 'About' page
View all posts by Cat →
This entry was posted in Diet, Health and tagged fiber, FODMAP, FOS, inulin. Bookmark the permalink.