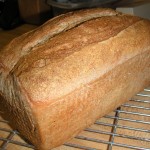 The sponge is a means of ensuring your starter is very active, with strength to rise the bread dough. It is basically the first step in the bread recipe, and includes an overnight rest. All sponge methods produce a lighter loaf with better rise. And – big bonus – the sponge does a lot of the work, so you don’t have to knead as much for a lighter result!

This method is from The Encyclopedia of Country Living: An Old Fashioned Recipe Book by Carla Emery (1). Basically, the sponge includes:

The original recipe, from The Encyclopedia of Country Living: An Old Fashioned Recipe Book by Carla Emery (6), makes 2 loaves of hearty whole grain bread. I adjusted to 1 loaf for testing. Ingredients, below, reflect 1-loaf, with 2-loaves in parenthesis and original recipe amounts crossed-out where modified.

Other than the sponge, this has only one rise. But I think you would get a lighter loaf if you allowed it one rise in the bowl before forming the loaves. It’s worth trying…

See Testing Carla’s Method (below) for my testing of this recipe. Ingredient amounts below, adjusted per 7/9/11 testing on 1-loaf and my smaller size pans.

I revised Carla’s recipe for testing by reducing the ingredients to make just one loaf. To do this, I used the total ingredient amounts for my version of Ronny’s Simple Sourdough Bread (modified for my smaller loaf pan).

It’s important to note that I started with Ronny’s 100% whole wheat starter, and then fed it with rye, oat, barley and spelt for a few weeks while I experimented with Ronny’s Simple Sourdough Bread, and researched other recipes.

Before beginning, I did an aggressive feeding of my starter to make it nice and lively, and to made about ¾ cup starter (⅔ cup for the bread and the rest to keep my starter going). See Aggressive Feeding (in Sponge-Method overview) for more detail.

What went wrong? The sponge didn’t rise – or it may have rose during the night and then fell by morning. I’d like to try the 2-phase sponge, each rising a shorter time, but will defer that for now. (See Sponge Methods for Sourdough Bread, an Overview and scroll down to Baker’s Forum Sponge Method for French-Style Bread). I’ll stick with 100% wheat until I get this down. Also, since it didn’t make as big a loaf as my pan, I’ll increase the recipe.

Before beginning, I continued an aggressive feeding of my mostly-wheat starter: yesterday morning I fed it to double its volume, then fed again in evening, to yield a little more than 1 cup starter. I reserved 2 Tbsp starter to keep it going, and used the remaining cup for the sponge.

I intend to let the sponge work for 8 daylight hours (so I can observe if it rises then falls), then build up the dough, rise in the loaf pan about 2 hours, and bake, all in the same day.

(1.) To 1 cup starter I added 1 cup water followed by the flour. It was too thick for a sponge so I added another ¼ cup water, stirred it up to develop gluten, covered with a damp cloth and plate, and let it rest, about 10 AM. It is behaving more like a sponge, but by noon hadn’t risen much.

At 3 PM, it hasn’t risen or bubbled up much. I’m wondering if my starter is ‘sick’. At 4 PM (6 hours) it has a few bubbles, but still hasn’t risen. At 5 PM, no change. I measured temperature of the sponge – 68°F. Too cool! I re-dampened the cover cloth and set sponge inside my pilot-light-warmed broiler (about 95°F.). 6 PM: It has more bubbles but rise is minimal; internal temp is 82°F.. I’ll give it another hour. 7 PM: more bubbles, and when I gave it a stir it was really active. Yeah! (9 hour rise).

(2.) Worked in 1 ½ cups flour, then turned it out onto floured board. Pressed to 1” thick and sprinkled the salt over top and rubbed it in with wetted fingers. Kneaded 10 minutes or so, working in another ¼ cup of whole wheat flour. Formed it into a cylinder placed it in my buttered glass bread pan, because this loaf was too big for the smaller steel pan that I have been using. It filled the glass pan a little more than ¾ up the sides, but I think it will be OK. I cut a slit on top and sprinkled top with water, then set back in my warm broiler, covered with a damp cloth, at 7:30. Total flour: 3 ½ cups; total water 1 ¼ cup.

(4.) It did get some oven spring, rising a bit in the center, above the top of the pan after 20 minutes at 425°F. Then reduced heat to 375°F for 45 minutes. It got pretty brown and the crust is hard. I let it cool overnight and could hardly wait to taste it when I got up. OMG, it was hard to cut through the crust, but inside it is so good! albeit quite dense.

I’d like to try something different, from Frazgo Feasting (2) for making a white-bread freeform sourdough loaf (not yet tried/tested):

See my 'About' page
View all posts by Cat →
This entry was posted in Baked, Fat or oil, Flour, Leavening, Sourdough and tagged sourdough, sponge. Bookmark the permalink.