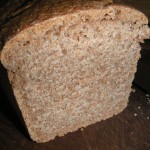 The sponge is a means of ensuring your starter is very active, with strength to rise the bread dough. In this version, part of the sponge is removed after the rise, to be used as starter for next batch. The sponger is the first step in the bread recipe, and includes an overnight rest. All sponge methods produce a lighter loaf with better rise. And – big bonus – the sponge does a lot of the work, so you don’t have to knead as much for a lighter result!

This method is from The Tasssajara Bread Book by Edward Epse Brown (1). The sponge includes: 1) starter (should be an active starter – lots of bubbles); 2) all of the warm water required for the recipe, and 3) roughly half the total flour for the recipe. After the rest, the original amount of starter is removed to be used as starter for the next batch. The remaining flour plus salt and oil are added after the overnight sponge rest.

I’ve been a fan of the Tassajara Bread Book, by Edward Espe Brown, ever since it was first published in 1970, and now in its 3rd edition. It includes a section on sourdough. I tried this in August 2011 with mixed results; however, subsequent to that trial I realized my starter was contaminated, so I made a new starter using all whole-grain spelt flour and have had better success. See testing, below.

This method is very similar to Carla Emry’s method, differing mainly in the method for preserving the starter, and the amount of starter used (Tassajara uses a larger amount of starter than Carla Emry). You make up the sponge, some of which will replenish your starter and the remainder will be used to build the bread.

An autolyze is a resting step for the dough that allows the dough to hydrate, before salt is added to stop the autolyze. See second recipe below.

The original version makes 4 loaves, or individual dinner rolls or English muffins. I halved ingredients for 2 loaves. For testing, I made only 1 loaf. Per testing, I conclude that adding an autolyze step gives a better result. I’ve updated ingredient amounts per testing, but include original amounts crossed-out & in parenthesis).

NOTE: amounts in red are as adjusted per testing

I wanted to test adding an autolyze step to the Tassajara recipe. I used my new whole spelt starter for this test, and followed Tassajara method (detailed above), but modified for autolyze process (per Northwest Sourdough’s Autolyze Experiment #1 (4) and Sourdough Baker, Sponge method with autolyze (3)).

Because I used spelt starter and spelt flour for this test, I had to shorten the sponge-rest time to 6 hours (spelt works up faster than wheat).

See my 'About' page
View all posts by Cat →
This entry was posted in Baked, Fat or oil, Flour, Leavening, Sourdough and tagged autolyze, sourdough. Bookmark the permalink.