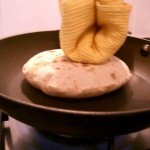 Chapati comes from India, as does Naan. Like Naan and Pita, it puffs up while cooking, then deflates as it cools, leaving a pocket in the center. It is a very simple bread to make, having few ingredients, primarily flour, water and salt. It can be made using sourdough starter or without, but is not made with bakers yeast. It’s a great way to use up cast-offs from feeding a sourdough starter. Chapatis don’t keep well, so make up just enough for one meal.

Some recipes call for oil, but this is not needed except to oil the bowl while the dough rests (to make it easier to remove from the bowl, and to keep the surface from drying out. Neither do you need to oil your griddle of cast iron pan as long as they are well seasoned.

Notes on Ingredients and Equipment

Refer to Flatbreads: Note on Ingredients & Equipment. Below are some notes specific to chapati.

I made my first sourdough starter using dark rye (because, at the time, rye was the only grain that didn’t cause a food sensitivity issue). Admittedly, people of the Indian subcontinent probably never made chapattis using rye flour, as rye is a grain of the northern regions nearer the arctic circle.

For my first try, I followed instructions in Ronny’s wheat chapatti recipe (from ESP’s Sourdough event (2) ) which is very vague on amounts. I used my dark rye starter cast-offs, and light rye as the added flour. They didn’t puff up much during cooking, but they had a nice texture. However, I found the flavor of rye to be too strong when it is the only grain in the bread.

I would like to try chapatis again, using a wheat starter, and wheat or spelt as the added flour, once my sensitivity is cleared, so I’ve included an adaptation below, that I will use when that time comes.

My friend Ronny makes fresh chapati nearly every day using her sourdough cast-offs. The sourdough in this case is not used as a leavening agent (not used as a yeast substitute), since chapati are not leavened – they form bubble-pockets from steam as they cook, but deflate again as they cool.

As mentioned above, the ideal flour for chapati is a high protein whole wheat flour from India called ‘atta’ flour. If you cannot find this, whole grain hard white or red wheat flour is a good substitute (I get mine from Wheat Montana).

The recipe presented here is based a Sourdough.com (3) sourdough recipe, and a non-sourdough chapatti on A Bread a Day (4). See below for testing.

Place starter in a bowl; add whole grain or atta flour with salt. Add about ⅔ of the water and work into the dough. Let rest 5 minutes for the flour & water to come to equilibrium, then add more water as necessary to make a nice kneadable dough.

Mix/knead, in bowl, for just a minute or two until everything is mixed, adding more unbleached white flour or water as needed. Very lightly oil cleaned-out bowl (about ¼ tsp oil), then rotate ball of dough in bowl to coat all sides. Cover with damp cloth weighted with a plate, and let sit for 5 – 8 hours.

Divide dough into 6 portions and roll them out on lightly floured surface very thin (1/16” or less). Keep them covered until ready to cook. Dust off loose flour from both sides before cooking.

Heat well-seasoned cast iron skillet over medium-high heat; you do not need to oil. If the skillet is not well seasoned apply a very tiny amount of oil with a paper towel. Place rolled dough in hot skillet and cook quickly on each side (1 -2 minutes per side). Bubbles will appear while cooking the first side; check underside for golden brown spots indicating time to turn it over. The whole thing will puff up while cooking the second side; cook until the brown spots appear, then remove to cooling rack. It will deflate while cooling.

Testing 2/5/12: I’m making this to serve with the Greek-Style Slow-Roasted Chicken or Game Hen I’m testing for Sunday dinner. Used new whole spelt starter, about 7 days old and made half recipe (6 Tbsp each starter & flour, ¼ tsp salt and ½ tsp olive oil). Added 1 Tbsp warm water and let rest – almost right, just like that, but I added another ½ Tbsp warm water, worked that in, then kneaded in white spelt flour, about 1 – 2 Tbsp. Works up beautifully through kneading. Then set to rest in covered, oiled bowl at 2 PM. Formed dough into balls around 6:15; it was quite soft and tended to stick to board while I kneaded in a bit more flour. Started rolling and cooking at 6:30. Made 6 total; the first 4 I rolled too thin I think. They bubbled up a bit in spots but didn’t really form pockets, and as they cooled they turned into cracker-like crisps. The last 2 I didn’t roll as thin and they behaved better, creating pockets. Taste is good with lots of butter.

See my 'About' page
View all posts by Cat →
This entry was posted in Fat or oil, Flour, Griddle, Leavening, Sprouted and tagged flour, salt, sourdough starter, water. Bookmark the permalink.