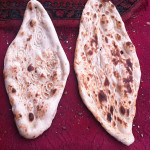 Naan is a flatbread common in all of Central Asia, including Iran, Afghanistan, Pakistan and India. It is very similar to pita, but made with yogurt and brushed with melted butter or ghee, and often flavored with spices like coriander. I first tried this amazing bread at a small restaurant in Portland, Oregon: Bombay Bicycle, and was hooked.

Traditionally baked in a Tandoori oven, it can be made at home in your oven or on a hot griddle – or in an outdoor brick or cob oven.  Like pita, it puffs up into an air-filled balloon when baking (or into several smaller bubbles), then falls when cooled. The bubbles turn dark golden-brown from cooking.  Naan is best served while still hot from the oven or griddle.

An outdoor brick or cob oven would be perfect to bake naan. Using your kitchen oven to works best if it provides heat both above and below the naan, and a Baking Stone (or use a regular baking sheet) to place on the lowest rack position. A Pizza Peel is handy to transfer naan to and from the stone.   Otherwise, consider baking your naan on a hot dry griddle (about 450°F), and turning them over during cooking (similar to Lefse – Scandinavian Potato Flatbread).

Although you can butter the naan before baking (using butter or ghee),  I got the best results from moistening with water before, then buttering after baking.

For an excellent video on making naan, visit Manjula’s Kitchen (1).

Refer to Flatbreads: Note on Ingredients & Equipment. Below are some notes specific to pita.

I developed this recipe based on research of several naan recipes, from which I chose 5 from different countries (references 1 – 5), 4 of which use white flour and one uses whole wheat. See Constructing my recipe, below. I’ve revised my original recipe after the first test (see below) to include a 12-hour whole wheat sponge, then adding unbleached white flour after the sponge rise and for rolling.

I love this so much, I never got around to testing my Pita recipe. I’d like to revise it to a 12-hour (overnight, lightly acidic sponge, as in this naan recipe).

May 2021 update: Now that I have a Montana source of sprouted grain flour (Granite Mill Farms, Trout Creek MT), I’d like to test this using sprouted wheat. One of these days … I note that Naan is an ancient bread, pre-dating modern flour (not sprouted) by many decades.

Two alternative methods for baking: oven or griddle. As it bakes, it will bubble up and brown in spots – see photo, above.

For each naan after rolling, and right before baking it: Pick up and stretch each oval to about 8 inches long (stretching is important). Lightly wet hands; pass each naan a few times between the wet hands to moisten, then stretch it.  Do not butter, but place directly on stone/griddle.  Butter after removing from oven/griddle; then, if desired, sprinkle with cilantro or other fresh herbs, or with Unrefined sea salt.  Wrap in foil to keep warm.

Most recipes have the major ingredients in common:  water, yeast, flour, yogurt, baking soda or powder, salt and ghee. [NOTE:  Ghee is clarified butter, with all but the butter oils removed; it can be found in most natural food stores, or you can make your own.]  Garlic, herbs and/or spices (such as coriander) can be added to the dough, sprinkled on the rolled-out dough before baking, or mixed with the butter/ghee and spread on after baking.

White flour is used in most recipes, but I prefer mostly whole grain flour, and a sponge technique, to partially predigest the the complex protein and starches in the flour.   Two Afghan recipes call for a whole wheat flour sponge (see cdkitchen (5) and Golden Road to Samarqand blog (5)).

There are several video recipes on the web which give you an idea of how this is made, even though they use white flour.  My favorite is by from Manjula’s Kitchen (1); another is from Natasha Levitan (4).  However, both use white flour.

When I downsize the Afghan version to 6 smaller naan, the ingredient amounts roughly resemble Manjula’s white flour naan (1), except that the liquid includes more yogurt and less water for the whole wheat version.

It is also interesting that the Afghan recipes mix boiling water with the yogurt, then cool it down to a temperature comfortable for yeast.  The use of the boiling water must be to kill competing organisms in the yogurt, so as not to interfere with the action of the yeast.  [I noted when developing my whole wheat bread recipe using a yogurt sponge, that the bread did not rise as well as I would have liked; this was resolved by adding boiling water to the yogurt, after learning this technique here.]

Refer to next section, for comparison of ingredient amounts between the reference recipes, based on 2 cups flour total.

Another issue is how long to let the sponge rest.  The Afghan recipes use all whole wheat and a 1-hour sponge rise with yogurt.  In order to effect partial digestion of the flour, the sponge needs to rest overnight, or at least 12 hours.  For the first test, I followed the original recipe with only a 1-hour sponge.  For my second test, I allowed the dough to rest in the refrigerator 12 hours (as for my Traditional Focaccia (Italian Flatbread) recipe).

Comparison of Ingredients and Methods between Recipes

All but one recipe bake the Naan in the oven.  I decided not to use the grill recipe for further comparison. However, during testing, I got better final result if I cooked the Naan on my stove-top griddle, than when baked in the oven.

The first recipe, which I believe is an authentic traditional version, uses 2 cups flour to make 6 Naan.  The other recipes all used more flour for a larger quantity of Naan.  In order to make a valid comparison, I proportionately revised the larger recipes to use only 2 cups of flour.

Three of the selected recipes do not include a sponge method, and use exclusively white flour. The other two recipes (CD Kitchen/Afghan) use exclusively whole wheat flour for the sponge and the final mix; this requires more added moisture than white flour — refer to Total Liquid comparison).  My final recipe uses whole wheat for the sponge, and unbleached white for the final mix. 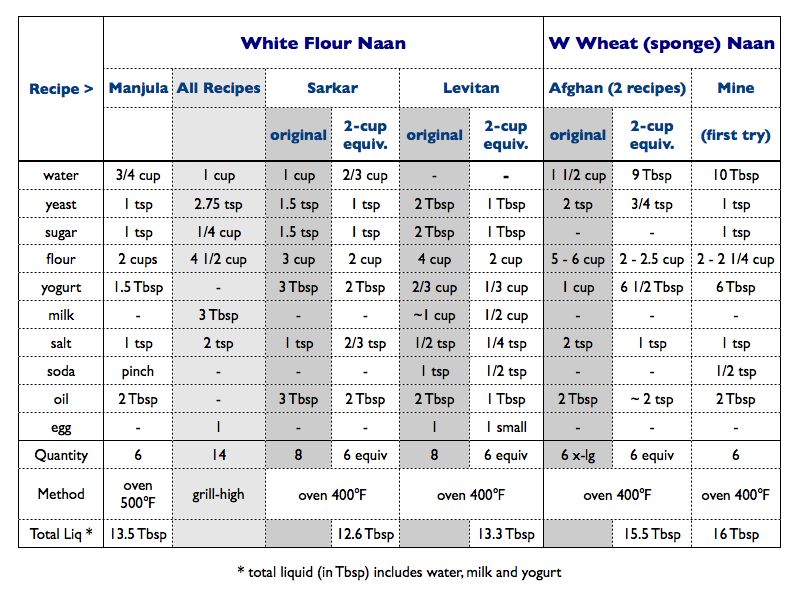 2/24/08: (the original recipe used for this test is copied below): Used 2 T warm water + ½ tsp sugar to proof ½ Tbsp yeast.  Heat 6 Tbsp yogurt with ½ cup boiling water; cool, mix with 1 cup ww flour and yeast mixture to make sponge.  Rise 60 min. Stir in 1 tsp salt, 2 Tbsp olive oil; mix in ½ c ww flour, ½ c white flour, ½ tsp soda to form the soft dough.  Required 3 – 4 additional Tbsp white flour for light kneading and rolling. Baked on pizza stone in bottom of 450°F oven 3 minutes, then under broiler flame 1.5 minutes (rather than turning naan over). Made 6 small naan.  Result:  Texture and flavor are nice, tho they didn’t puff to make pockets.  No brown spots, even after putting under the broiler.  Next time, try adding minced or pressed garlic to dough, wetting rather than buttering rolled dough, and using my stove-top griddle, like lefse.

3/1/08:  Ingredients as previous, plus added 3 cloves garlic, minced fine, and ½ tsp ground coriander with salt, oil and final flour.  Allowed sponge to rise 1 hour in warm spot, punched down and rested in refrigerator overnight.  Removed from fridge and set in warm spot 2 hours before adding final ingredients.  Then 1-hour rise before rolling, wetting, and cooking.  Used stove-top griddle (maintaining between 450° and 500°F).  Made 6 small naan.  Result:  Wonderful flavor.  Still did not puff, but got brown areas on both sides (I turned them over halfway).  Unfortunately, I allowed the rolled-out naan to rest too near the griddle.  They rose and stuck to the surface, so they had a weird shape.  Next time I need to keep them away from the heat until ready to cook.

3/7/08:  Recipe as for 3/1, but I skipped the 1-hour rest period and simply put dough into refrigerator overnight, then warmed on counter 2 hours before shaping and baking on griddle.  I moistened my hands to dampen each rolled naan (both sides) right before baking.  Made 6 small naan.  Result:  Perfect, with brown spots.  They did not bubble up, but that doesn’t matter; the texture and flavor are wonderful.

* NOTE: Testing resulted in revision of this version. See my final recipe, above, for version after testing.

I’ve revised my original recipe for a 12-hour sponge, using whole wheat flour to make the sponge, and adding unbleached white flour after the sponge rise and for rolling.

Pick up and stretch each oval to about 8″ long, and butter one side*.  Transfer to hot baking stone or griddle, buttered side down, and bake about 3 – 5 minutes.  Remove naan from oven and butter the top side.