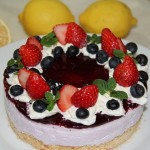 I’m very particular about cheesecake.  I don’t like the creamy, pudding-like kind at all, and will turn it down when offered.  However, I do rather like the cakey kind, but can eat only a small serving, preferably with fresh berries or a berry sauce, or lemon curd.

I’ve never actually made a cheesecake, mainly because it would go bad before I could finish it, but also because it has always intimidated me.

The crumb crust uses a type of dried bread called zwieback or rusk. I make my own rusk and would use that. But how much to use? What is the cups/ounces for ‘1 packet of Zwieback’ as specified in the recipe?

When I was in my French period, a friend gave me a copy of The Art of Fine Baking, by Paula Peck (2), which I have always regarded as the bible of fine, European recipes. It includes a recipe for cheesecake that I believe to be a ‘true’ cheesecake, the kind that has a  cake-like texture that I prefer. After baking, you leave it in the off-oven to stand for several hours, which I believe is what creates that texture. I have not yet tested this recipe.

The crumb crust uses ‘1 packet Zwieback’ and 1 cup ‘grated’ walnuts or pecans. See discussion, above, regarding the Zwieback. Regarding the nuts, I’m not sure how one would ‘grate’ walnuts or pecans, other than with a food processor. Using a blender would tend to turn them into nut butter, and running the small things over a hand grater would grate my fingers. So instead, I would use almond meal (ground almonds), at least for the first testing.

It also uses heavy cream, which I would use raw as a first choice. And I would use full-fat cream cheese (the recipe doesn’t specify) and real butter. 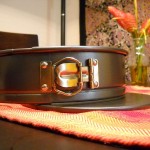 This recipe, from The Fine Art of Baking (1), is something you make a lot of, and then use a little bit at a time.

Place sugar in a canister (with tight lid). Bury the vanilla beans in the sugar, then put the lid on the canister and let it rest for a few days before using. It can be kept a long, long time.

See my 'About' page
View all posts by Cat →
This entry was posted in Baked, Bread, Citrus, Dairy, Eggs, Fat or oil, Flavoring, Nuts and seeds, Spices, Sweetener. Bookmark the permalink.