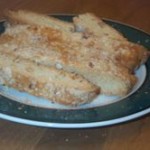 I love biscotti, and I also love mixing herbs into sweet treats, so this really appeals to me. The recipe may sound difficult, but they are really easy to make, once you get the prepping completed.

Dark chocolate is a very healthful ingredient, but it should be at least 70% cacao mass. I prefer to use Belgian chocolate, but you can use dark chocolate chips as in original recipe.

This recipe is adapted form article in Nov 16, 2016 Daily Inter Lake (originally by Melissa D’Arabian of the Associated Press (1)).

The original calls for dark chocolate chips, chopped finely. But I prefer to use Belgian dark chocolate (comes in a bar). I’ve also made a few other changes, per my preferences, but I’ve not yet tried my adaptation.

Ordinarily I would presoak the whole grain flour before mixing dough, but biscotti recipes do not include sufficient liquid that could be used for the presoak. Another alternative would be to use sprouted whole grain flour, but it can be hard to come by unless you sprout then dry it yourself before grinding.

If using spelt flour, you may need less sweetener as it is a sweeter flour than wheat. You may also need more flour, if dough is too soft (see Spelt vs Wheat in Baked Goods for more).

NOTE about stevia: I’ve not adapted this to use stevia, as I believe sugar is essential for the texture. However, it could be possible to use a mix of sugar and stevia (powdered extract), perhaps ¼ cup sugar and ⅛ tsp powdered stevia extract. I recommend dissolving the stevia in the vanilla before mixing into dough, rather than adding it with the sugar. See Almond-Anise Biscotti, with Chocolate Variations for example of using stevia.