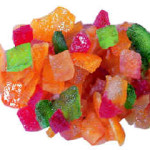 My family’s Scandinavian Tradition for holidays includes two wonderful breads: Hot Cross Buns (Fastelavnsboller) for the Easter season, and Yule Cake (Julekage) for Christmas. Both are rich and slightly sweet, with candied fruit (an ancient way of preserving the fruit from summer, to last through the cold months of winter and early spring) and spices like cinnamon, cardamom and nutmeg.

Julekage (pronounced yoo-leh-ka-ya) is a festive, fruit-studded bread, traditionally served during the December holidays.  It is similar to German Stollen, but is entirely a yeast bread.

Now that I have an excellent source for sprouted grain flour: Granite Mill Flour in Trout Creek MT (4), I’d love to try this Julekage recipe using their sprouted wheat flour, as sprouted flour is the most healthful of all grain flours, and generally, you use the same amount of sprouted as regular flour in recipes – i.e., cup-for-cup. See my article for more: Flours & Starches: Sprouted Grain & Sprouted Grain Flour (About).

Serve either version with plenty of fresh dairy butter (salted or unsalted).  Also good toasted and served with butter, and plenty of hot coffee.

For the candied fruits (see photo, above), I use mostly the mixed variety (cherries, lemon and lime), but also add a bit of candied citron, lemon or orange peel, and some dried currants. I’ve tried using dried fruits (apricots, cherries) instead of candied fruits, but it just isn’t the same. 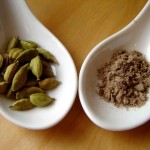 The East-Indian spice called cardamom is essential for this recipe, and there is no substitute.  (Photo, left, from Vedic healing (1)). If you can’t find it, don’t bother to make the bread.  Cardamom seeds are fairly tiny, about the size of poppy seeds, and are encased in a dry pod. NOTE: It is best to use cardamom that is less than 6-months old. OR start with whole cardamom seed, then just before using, remove the seeds from the tough, papery pod, then grind and use the inner part (see Herbs and Spices: A – F under “cardamom” for more info).

Or you can probably find ground cardamom in the bulk spice section of your natural foods store, and pay attention to “best-by” date.  Don’t buy much, because it easily goes stale.

This recipe does not include a sponge (pre-ferment), but it could easily be adjusted to do that. For the sponge, do steps 1 – 5 as indicated, but omitting the butter and salt at step 3 (these will be added later).   After the 4-hour rise, beat in melted butter and the salt and then proceed with remainder of the recipe. These steps are in blue text, in the method section.

I have not yet tested using spelt or sprouted-grain flour; I’ve added notes in red text, in the recipe below.

This version is sweeter and richer than the traditional version above, and makes 2 loaves.  I provide 2 versions:

As described above, this does not include yogurt; thus this sponge does not fully break down the phytates in the flour to release the minerals, but it makes it easier to fold in the remaining flour, and produce a better texture in the bread.

I have not tested this method.

This version is similar to Version I, but includes deactivated yogurt to acidify the sponge. This acidic environment activates enzymes in the grain – similar to what happens at germination – which then break down anti-nutrients like the mineral-binding phytates. The enzymes also break down some of the gluten, so extra gluten is added.

This recipe takes all day as written. An allternate method starts the sponge the night before, to reduce the time on baking day. For this sponge, use 1 cup scalded milk instead of ¾ cup, and omit the proofed yeast mixture.  Then proof the yeast in the morning, using only ¼ cup warm water, 1 ½ Tbsp dry yeast, and 1 tsp sweetener; stir into the dough.  Then proceed as written.

NOTE: the added gluten is needed because the acidic sponge breaks down much of the flour’s gluten. This version takes all day, about 8 hours or so.

12/17/07:  made test loaf (half recipe) using 1 Tbsp dry yeast proofed in ¼ cup water and 1 tsp maple syrup, ¼ cup + 2 Tbsp milk and ¼ cup yogurt, ½ Tbsp gluten, and 1 ¼ cups whole wheat flour in the sponge.  In part 2, I used total of ¾ cup candied/dried fruit, 1 tsp sea salt, 1 egg, 2 Tbsp melted butter, ¼ tsp cardamom, and 1 ½ cups white flour.  Analysis:  Sponge rose, then started to bubble after 2 hours, but did not rise for remainder of the 4 hours (this is normal).  Dough had good elasticity in part 2, rising wonderfully both times (2 ½ hours for first and 1 hour for second). Result: Good taste and texture; not beery.  Light color–whole wheat flour is not obvious.

12/14/08:  made full recipe (2 loaves) as written, except I used more fruit (2 cups instead of 1 ½ cup, to empty a container).  My kitchen was cool (frigid weather outside) so the scalded milk cooled too quickly to kill all the probiotics in the yogurt (which would compete with the yeast).   In part 2, I added ¼ tsp baking soda with flour because dough smelled slightly sour (too acidic).  Used only about 1 ⅔ cup flour at first kneading – dough was not as elastic as I’d have liked, and stuck to the board, but was getting too stiff to add more flour.  I think this was because of the extra fruit.  Result:  Rose nicely each time, but didn’t develop that wonderful elasticity as before.  Good taste and texture, but too much fruit.  The baking powder was a good addition this time.