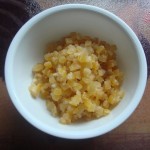 My family’s Scandinavian Tradition for holidays includes two wonderful breads: Hot Cross Buns (Fastelavnsboller) for the Easter season, and Yule Bread (Julekage) for Christmas. Both are rich and slightly sweet, with candied fruit (an ancient way of preserving the fruit from summer, to last through the cold months of winter and early spring) and spices like cinnamon, cardamom and nutmeg. Sometimes, for a change of pace, I add chopped pecans with the dried fruit, but this is not traditional.

If your only experience with dried fruit is heavy, old-fashioned, rum- or brandy-soaked fruitcake, you’re in for a treat, because these buns are light, only slightly sweet, and not overburdened with the fruit.

The name Fastelavn, is for the holiday otherwise known as Carnival (or Mardi Gras), seven weeks before Easter Sunday, on the day before Ash Wednesday, the beginning of lent. (1)

Like Julekage, Fastelavnsboller include currants, candied citron and sweet spices, but also grated lemon zest. The bread is made in single-serving buns, rather than loaves, and each bun is topped by a cross decorated with frosting.

Eat these while still warm from the oven, with plenty of fresh dairy butter (salted or unsalted) and lots of hot coffee. These are light and slightly sweet rolls that just beg to be eaten. Children love them!

NOTE: I’ve made this many times when I lived in moderately humid Portland OR, usually a half-recipe. Apr 8, 2012 is the first time I tried the half-recipe in less humid Bigfork MT. I’ve had to adjust the flour amounts: where a range is provided, the amount in red is for the less-humid areas and the upper end of the range is for more humid areas. See testing, below for details.

Whip egg white a bit then add powdered sugar, 1 Tbsp at a time while mixing, until quite thick. Add a bit of milk to get the desired consistency.

Make a cone out of parchment paper, with a small hole at the tip. Fill cone with Icing and pipe onto each bun, over the cross you had cut in the dough before baking.

4/8/12:  I followed as originally written, using ¾ cup whole wheat flour and started with ¾ cup white flour. Dough was way too stiff, and hard to work. I tried to work more water into the dough during kneading, but that only made the dough stick to the board. I finally got it worked to the right texture. I’ve modified the flour amounts to reduce total flour by ¼ cup (for half-recipe), and changed the mixing instructions to add a small amount at a time so you have more control at getting it just right. More can always be added if the dough is too soft. After first rise and punching down, it was still quite stiff, but I managed to work in a little water. I divided the dough into 12 buns, but they don’t fit well in my 9” square pan. I need to unpack my 8”x11” pan from Portland, for next time. Into oven after second rise, to bake total of 30 minutes. I didn’t frost them, since I’m avoiding sugar. Result: They didn’t rise as much as I like, probably because dough was too stiff. Nice flavor; not too sweet. Could have used less nutmeg and more cardamom, so modified accordingly.