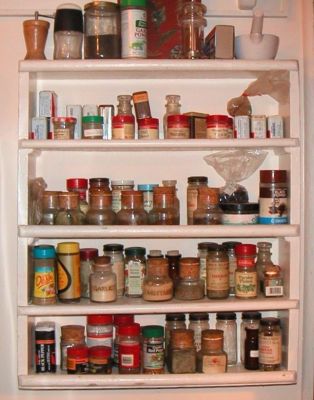 Many people mistakenly mistake this for a spice blend, such as Apple-Pie-Blend; but allspice is actually the dried unripe fruit of a Caribbean evergreen tree. Its name comes from its aroma, which reminds one of a mix of cinnamon, cloves, ginger and nutmeg. Allspice is very commonly used to flavor lamb in Mediterranean & Middle-Eastern cuisines. In the Scandinavian countries it is used to season preserved meats; I suspect it has preservative properties.

It is a good substitute for cinnamon in recipes, but has different health effects. It is a common ingredient in jerk seasoning; see Cooks .ndtv.com (4) for a jerk paste recipe.

The main active ingredient in allspice is eugenol, which helps with digestion issues, and, along with the tannins in this spice, may help numb pain from arthritis or sore muscles when applied externally. Allspice has been used as remedy for: (1, 2)

and has antifungal and antiseptic properties.  (1,2)

When applied externally, it may help numb pain (3). 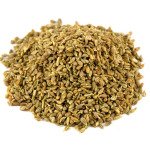 All three seeds have a distinct licorice flavor, and can be substituted for one another in recipes, but they come from different plants and have different health effects.

Anise (or aniseseed, above left) has been used traditionally to treat stomach upset and gas.  The phytoestrogens in anise can stimulate milk production in new mothers.  And it has anti-inflammatory properties. (2)

Its essential oils are antibacterial, antifungal, and insecticidal; it has been used successfully to treat head lice, and is effective against the plasmodia that cause malaria. (2)

‘Fennel’ (left): is the seed of a plant related to celery, carrot, dill, and parsley; see below, for more on its benefits. 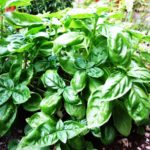 By far, the best way to use basil leaves is fresh, picked from the live plant. Dried basil can also be used, but the flavor is not as strong. One of my favorite uses for basil is my Balsamic & Basil Vinaigrette.

It was first native to India, Asia and Africa, but its culinary popularity has allowed it to spread around the world. Both leaves and softer stems can be used to flavor pesto, soups and sauces. Torn fresh leaves are great added along with other greens to salads.

When cooking with basil, it is best to add it near the end of the cooking time, to preserve its volatile oils which provide the bulk of its health benefits. Additionally, it is an excellent source of vitamin K, manganese, copper, carotenoids and vitamin C, and a good source of calcium, iron, folate, magnesium, and essential Omega-3 fats.

However, you will get maximum benefit if you use it raw. Add a few leaves to the greens in a salad, or add it to your salad dressing (such as my Balsamic & Basil Vinaigrette). Make a pesto and add it to individual servings of pasta, meats, etc..

To dry basil leaves (2): “Warm your oven to 140 degrees while placing a single layer of basil leaves on a baking sheet. Turn off the oven and pop in your pan for 20 minutes (you don’t want them to actually bake). Remove the pan, cool the leaves, and store immediately in airtight bottles or zip-lock bags, away from sunlight”

Bay leaf is a common herb in Italian recipes, casseroles, soups, and classic bean recipes; it works by adding depth and dimension to the flavor.

Both fresh and dried bay leaves help the digestive system function properly, acting as a diuretic and eliminating toxins. Ancient Greeks and Romans believed that the leaves symbolize wisdom, peace, and protection, and were often incorporated in wreaths to be worn or to adorn one’s dwelling. (29, 30)

The leaves contain many volatile active components such as a-pinene, ß-pinene, myrcene, limonene, linalool, methyl chavicol, neral, a-terpineol, geranyl acetate, eugenol, and chavicol, which are known to have been antiseptic, anti-oxidant, and digestive properties; and thought to have anti-cancer properties. (30)

Fresh leaves are good sources of folic acid and vitamin C. Fresh or dried, the are a good source of vitamin A and many B-vitamins that help in enzyme synthesis, nervous system function, and regulating body metabolism to increase energy and amp up th metabolic rate. (29,30)

Lauric acid in the bay laurel leaves has insect repellent properties (30). (NOTE: lauric acid is not found in many food sources; the other main source is raw breast or dairy milk).

This flavorful spice is the seed of a member of the ginger family.  There are two genera, one commonly called “green” and the other “black” cardamom.

Commonly used in Asian curries, it is also popular in Scandinavian cuisine, especially for major holidays such as Christmas and Easter.  It has a very strong, aromatic flavor, so a little bit goes a long way.

To use the tiny seeds, you must first remove them from the tough, papery pod.  Then they are easily crushed or ground in a mortar. However, some recipes use the whole pod.

Green cardamom is used medicinally to:

Both forms (green and black cardamom):

Cayenne is very high in vitamin C and carotenes, has the full vitamin B complex, and is rich in the minerals calcium and potassium, making it good for the heart. 11

It is used primarily to soothe the digestive system; cayenne:

Anecdotal evidence indicates “Cayenne has been known to stop heart attacks within 30 seconds.” (25)  It has other benefits for the circulatory system as well.  It is used to (26):

Cayenne & Tabasco sauce can increase metabolism and fat-burning ability by up to 25%.

Effective pain relief for the following is provided by capsaicin, one of cayenne’s components (25, 26): 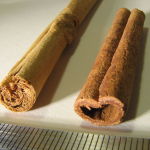 Cinnamon is the aromatic bark of trees, cut and scrolled as it dries. It is sold both as ‘cinnamon sticks’  (scrolls) and ground cinnamon. There are two main types of cinnamon; both have similar flavoring (from cinnamaldehyde), but differ in their health-promoting properties. See Cassia vs True Cinnamon, below, for more.

For me, the most important and frequently used spice on my shelf is cinnamon, for its flavor and many health benefits. It is not just for sweet treats like cookies and spice cakes. It is also used in many savory main dishes as well; for example, my recipe for the famous Greek casserole, Moussaka (Greek Lamb & Eggplant Casserole), or in a spice rub for lamb chops.

It’s no accident that cinnamon is added to many sweet baked goods: cinnamon helps to curb blood sugar spikes from ingestion of sugary foods (see below).

The cinnamon you can buy on your grocer’s shelves is a related spice called cassia, or Chinese or Vietnamese cinnamon. True cinnamon comes only from Ceylon (Sri Lanka).

In traditional Chinese medicine, cassia cinnamon is used for colds, flatulence, nausea, diarrhea, and painful menstrual periods. In traditional Indian medicine (Ayurvedic), true cinnamon is used as a remedy for type-2 diabetes/insulin resistance, indigestion, and colds, and it is often recommended for people with the kapha Ayurvedic type.

How I use the different types:

How to tell them apart:

‘* “Apoptosis is programmed cell death caused by biochemical changes, and it’s a normal part of cellular growth and development.” (32D)

Other health-related uses of cinnamon:

Recent research from Israel shows promise for the antiviral and antimicrobial properties of the oils derived from cinnamon (link for this source no longer works; the parent link is israel21c .org (16); search the Health tabs for cinnamon):

Clove is the flower bud of the clove tree, and is rich in minerals (such as calcium, iron, phosphorus, sodium, potassium), and other nutrients (hydrochloric acid and vitamins A & C). (18) They lend their flavor and aroma to many beloved holiday foods and beverages such as gingerbread, hot toddies, and pumpkin pie; also to stud a baked holiday ham.

Historically, cloves and clove oil has been used medicinally (1, 13):

Coriander is the seed of the cilantro plant, and belongs in the parsley family.  Cilantro leaves are a tasty herb often used in salsa and other Mexican dishes, and also in Asian cuisine. The seed has a nice savory flavor, and is a good source of iron, magnesium, fiber, and flavonoids. Its use has mention in the Bible.

Like basil, cilantro is best added add the end of the cooking time, or as a garnish.

“Treasured for its warm, earthy flavor that’s often featured in curries and chili, cumin seeds contain manganese, potassium, zinc, essential amino acids and proteins, along with medicinal properties such as antioxidant, antimicrobial and anticancer effects, that make them useful for human health. .. Traditionally, cumin has been used to treat digestive and nervous system disorders along with skin diseases” (From Green Med Info: 34b)

Cumin is a good source of iron and manganese. (21)  Iron is required by the body to make haemoglobin in the blood, for proper functioning of enzymes, and for manufacturing proteins. (19)  Cumin has been used as a food and cosmetic dye. It is also a common spice in SW, Mexican, Spanish and middle-eastern foods.

Dandelion leaves have more nutritional value than broccoli or spinach, being high in minerals, and vitamins C, A, K, thiamin and riboflavin. They are also a powerful diuretic. Their roots have medicinal value, especially for your liver.

See Mercola’s article, How to Grow Dandelion Greens (2) for more.

Dill is perhaps best known as a flavoring in dill pickles, but it is far more versatile. It is native to southern Russia, Mediterranean and western Africa. Both the leaves and seeds are used in recipes:

This list is not complete, but rather gives ideas on different uses for dill:

Stop fresh dillweed in the refrigerator either wrapped in a damp paper towel or with its stems placed in a container of water. However, it will only keep fresh for about two days.

Dillweed can be frozen, either whole or chopped, in airtight containers; Or freeze the dill leaves in ice cube trays covered with water or stock that can be added when preparing soups or stews. (13)

Dry dill seeds, then store in tightly sealed glass container in a cool, dry and dark place Stored in this way, they will keep fresh for about six months. (13)

Dill is a good source of calcium, minerals manganese, iron and magnesium; and also fiber.

See also Fennel or Finnochio (About)

Fennel is a member of the parsley family, and is native to the coastal shores of the Mediterranean. Nutritionally fennel seeds are a good sources of calcium, choline, essential fatty acids, iron, magnesium, manganese, phosphorus, potassium, selenium, thiamine, niacin, riboflavin and vitamins C and E (7).

Fennel seed contains anti-oxidant flavonoids: rutin, quercitin, and various kaempferol glycosides (13). These antioxidants can help reverse damage to liver cells (28). Fennel also contains powerful anti-inflammatory, anethole, which may also prevent occuarance of cancer; however, the source (13) does not make it clear whether this is in the bulb or seed.

Culinary uses are many; fennel seed is mostly interchangeable with anise, as both are similar in taste and aroma. It is used to flavor Italian sausage, which I use in my lasagna recipe. Fennel seed is common in Indian, Pakistani, Persian and Middle-Eastern cuisine, and it is one of the ingredients in Chinese Five-Spice. (9)

Fenugreek is a member of the legume family, and is commonly found in curries.  It has also been used to flavor artificial maple syrup and artificial vanilla.

It has many health benefits, the most documented of which is its ability to improve blood sugar control in both type-1 and type-2 diabetes.  This ability has been demonstrated in many double-blind studies, and is attributed to the amount and type of fiber present in the seeds.  Galactomannan is a specific type of soluble fiber that can slow the rate of postrandial (after meal) glucose absorption and promote satiety.