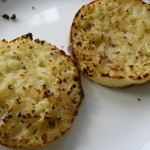 Have you ever wondered what gives English Muffins that unique bubbly texture and sweet/sour flavor? It has always puzzled me until I started learning about grain fermentation. After mixing up the dough (which is really more like a batter), you let it rest for a long overnight (16 hours), during which time the dough batter ferments into a thicker, manageable dough, with lots of trapped air that creates the muffins’ unique texture. The 16 hour rest provides all the benefits of a pre-soak plus the benefits of fermentation, but is not quite sourdough (though it provides some of those benefits too).

During that long rest, the dough develops its flavor from the light fermentation, develops the gluten for a more sturdy dough (than the starting batter) that can be easily rolled and cut. It breaks down the phytates to release the minerals, and begins the process of gemination which develops the enzymes and improves the nutritional content of the grain.

This recipe is adapted from Fine Cooking, originally by Nicole Rees (2). Makes about 8 – 10 muffins. The original uses part whole wheat, part bread flour (white), but I am leery of bread flour because much of it is brominated to improve gluten activity. Bromination is prohibited in most other countries because of the toxicity of the process; it is a powerful oxidizer and can cause cancer; it can also negatively affect the thyroid by replacing iodine in the thyroid hormones.

I prefer to use whole hard white wheat flour (whole-grain flour made from hard white wheat, such as Wheat Montana’s Prairie Gold (3); similar flour is offered by other brands as well, including King Arthur). Hard wheat is a high-gluten flour intended for breads and other yeasted recipes (see my article on Wheat flour for more about the different types of whole wheat and its flours).

The original uses instant yeast which can be mixed directly with the flour, but I prefer to use regular active dry yeast, which must be proofed in a bit of warm water or milk before adding to flour. The standard substitution is: 1 ¼ tsp active dry yeast for 1 tsp instant yeast.

English muffins will keep at room temperature in an airtight container for 2 to 4 days, or in the freezer for up to 1 month. Toast before eating.

This is the first recipe I tried for English muffins, adapted from the Tassajara Bread Book by Edward Epse Brown (4). It includes an overnight (at least 12 hour) sponge rest before adding salt, butter and remaining flour, so is similar to the fermenting time in the above recipe, but the sponge is thicker (greater flour to moisture ratio).  Another difference is that this recipe uses an egg.

Overall, this recipe makes more muffins (about 20) than the above recipe, as it has roughly double the amount of total flour.

NOTE: if you don’t have a round cutter, you can use a very sharp knife to cut the rolled dough into 3″ squares, dipping the knife blade into unbleached flour before each cut.