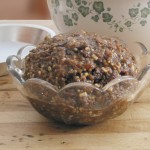 Mincemeat is a very old recipe, traditionally made with wild game and fruit (Pemmican is a close cousin to Mincemeat).

Traditionally, these high energy foods, rich in fat, protein and antioxidants, have been made by native or indigenous peoples for centuries. They were made during the rich warm summer months when wild game and fruits/berries were plentiful; then stored to last through the harsh winter months. But modern mincemeat is typically made without the meat and suet of the earlier versions, and is used as a sweet treat during the holiday season.

Although this is a “meatless” recipe, it does use suet, a special fat from pigs from which lard is rendered. These days, pigs are pretty lean, making suet harder and harder to come by.  You can use lard, but it doesn’t work as well as suet. Beef or venison suet can also be used. Ask your butcher to save scraps of suet until there is enough for this recipe, and then ask him to grind it for you (much easier than chopping it with a knife at home).  It may have a little bit of meat attached to the fat, but that’s OK.

For the sweetener, I prefer to use Rapadura sugar to light brown sugar, because Rapadura retains all the enzymes and minerals of the cane sugar. Another alternative is Grade B maple syrup.

I’ve written this recipe as a dessert pie, but the filling can also be used in cookies. While you can make this as one large pie,I much prefer individual pocket tarts.  Serve with rich vanilla ice cream, whipped cream, or whipped cream beaten with some cream cheese.  A hard sauce or brandy sauce are also nice with this pie.  Great during the holiday season.

This makes 8 – 10 individual pocket tarts.  I place extra baked tarts on a washed meat tray, slide into a sealable bag, and freeze for later use.

The Yogurt pie crust may sound a bit weird, but the flavor is a perfect balance with the Mincemeat filling.  This pie crust is an example of using soaked or sprouted grains, which increases the bioavailability of the grain’s nutrients.  Refer to my article on Soaking or Sprouting Grains for more information.  Alternately, you can use a regular pie or tart crust recipe.