Fermented Cranberry (or Other Berry) Relish 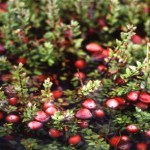 Cranberries are closely related to blueberries and huckleberries and are very healthful, being rich in vitamin C, manganese and antioxidants. They also help to prevent urinary tract infections. But did you know that cooking the berries increases the healthful benefits of the berries?  (See also WHFoods.com on cranberries (1) for lots more about the benefits of this fruit.

I have a great holiday recipe for cooked cranberry sauce, with orange, a bit of ginger and sweetened with stevia (see Cranberry-Orange Sauce for recipe). But the more I learn about the health benefits of fermented foods, the more things I want to try fermenting. I’ve used the basic ingredients of my cooked recipe (without the stevia), for the fermented version included here. Oh Lardy! (blog) has a good article on fermenting fruits and vegetables: What You Need to Culture Fruits & Vegetables at Home (2).

The Fermented Cranberry Relish is so delicious, I decided to try it using Blueberries, and it is equally delicious! See Testing Feb 2020, below

Researching the fermentation of cranberries

I found the following  recipes:

Then I adjusted the ingredients of each, for 2 cups (8 oz) cranberries so I could more readily compare them (see comparison of sample recipes, below).

I’ve included honey or sugar in this recipe even though I generally avoid these, because the lacto-bacteria in the whey will digest the sugars to make lactic and other beneficial acids (which is what gives lacto-fermented products their sourness).

Makes about 1 quart; or you can halve it for 1 pint.

* Note using whey leaves a white-powder at the top of the fermented product, so I prefer to use liquid from a previous batch. If you use liquid whey, here’s how to make it:  drain yogurt or kefir through cheesecloth at room temperature overnight, collecting the liquid whey that drips out. Save the thickened yogurt/kefir to use like cream cheese. See also Yogurt & Liquid Whey (for Lacto-Fermentation).

** I prefer to use my sterilized bowl with a pour-spout at the rim, because it can be difficult to mix in the Mason jar. After mixing I pour it into the Mason jar to ferment.

Dec 1, 2013: Mixed up a half recipe as instructed. I don’t have a food processor but do have a hand-operated food chopper, so used that for the cranberries and pecans. It got chopped a bit finer than I intended. I cut up the orange sections with a knife to avoid getting orange juice. Used combo of Rapadura and white sugar; it was too much to dissolve in the small amount of water, but hopefully will dissolve in the final mix. Added light sprinkle of clove, cinnamon & ginger. Scooped into quart jar, pressed down and covered with cheesecloth secured with rubber band. Set on counter. My house is 70F during day but gets down to 62 at night so may need to ferment more than 48 hours. Dec 3, 2013: stirred then gave it a taste. Mmmm. The flavor of clove rather dominates but I’m sure that will mellow. Not too tart and not very sweet. This will be a keeper but I’ll let it remain at RT for a while. Into fridge at bedtime for total 60 hours on counter. Dec 5, 2013: Decided it needs some chunkiness, so chopped up more cranberries, but this time coarsely, then added to the mix and pressed down. Didn’t need more liquid. Left on counter, covered with cheesecloth. Dec 6: Gave it a stir and pressed down again for another day on the counter. Dec 7, 2013: Back to Refrigerator, to wait for Christmas. Dec 31, 2013: I served this with my traditional lutefisk & lefse dinner on Christmas eve – delicious. I’ve been having a little bit each day since then, and shared some with friend Shelli and her boys – they all loved it too!. I call this experiment a success. However, next time, I won’t process them quite as long in the blender – or I’ll use my chopper again – so they will be more chunky. I’d also like to try this with other berry/nut combos.

Nov 25, 2019: Sterilized 1 quart jar and lid. Made full recipe using cranberries, whole small orange (with peel), and 1/3 cup pecans. Prepped and chopped separately (chopped orange with knife and berries and pecans with chopping device (separately), then mixed together in bowl. However, the chopping device didn’t work well for the berries; most remained whole. For starter used 2 Tbsp liquid from fermented beets, 2 Tbsp filtered water and ¼ tsp powdered culture. For sugar, used 2 Tbsp each Rapadura and white cane sugar, and 1 Tbsp raw local honey; also ¼ tsp each ground allspice and ginger. Transferred mix to sterilized quart jar, pressed down with potato masher several times. Added another Tbsp filtered water, screwed on lid and set on counter and covered with a towel to rest. It gets down to 65F in my kitchen at night, so set it on a small, upside down Dutch oven on top of the off-griddle on my pilot-lit stove where it is warmer when I go to bed; then move it to the counter when I get up. Shook, stirred and pressed down every morning. On Nov 28 (Thanksgiving) morning, transferred about ¾ cup at a time to blender, to break up the whole cranberries on “chop” setting, then returned them to the jar with lid. At 5:30 PM, the batch was beginning to be bubbly so transferred to 1-pint and 1-half-pint sterilized jars, and reserved a good spoonful to have with tonite’s dinner; deliciously sweet/sour. Let all sit, covered, on counter, then transferred to fridge before bed.

Feb 8 – 11, 2020: Followed cranberry recipe but used blueberries instead of cranberries, less honey (⅓ cup instead of ½ cup) since blueberries are sweeter than cranberries; for spices: ⅛ tsp each clove and cinnamon, and 1 tsp ginger. Also used orange and pecans as in original recipe. I ended up using more than a cup of frozen blueberries, to use up the bag, so I got more than a quart of ferment (about 2½ cups). Set in a dark place on kitchen counter to ferment, stirring daily until I noticed bubbles starting to form on morning of Feb 11. So I placed the large jar in fridge to slow down the ferment; around noon, transferred to 2 sterilized pint mason jars; had about ½ cup left over so added it to a half-empty jar of leftover fermented orange and stirred to combine. Result: The new batch is delicious but could have used a bit more ginger, perhaps 1½ tsp. This is a keeper! I bet huckleberries would be delicious, too!

Mar 22 – 25, 2020: That last batch was so wonderful, I’m making another batch. Used 2 cups chopped blueberries, 1 orange (cut-up flesh and peel), ⅓ cup chopped pecans, and only ⅓ cup honey; for spices, used ground, dried versions: ⅛ tsp each clove and cinnamon, and 1½ tsp ginger. For starter I used the juices from the previous batch. Mixed in sterilized bowl, then poured into Mason jar and mixed again. Screwed on lid and covered with a dishtowel while it rests in a dark corner, beginning 3 PM, Mar 22. Mar 23: Gave it a good stir; it was a bit bubbly – may need to move it to fridge if continues. Mar 24-AM: not so bubbly today; gave stir, and returned to dark corner. Mar 24-PM: gave it a good stir – not bubbly but is tasty. Mar 25: another good stir then into fridge. there is lots of liquid – I probably added too much water on Mar 22. No sour taste, tho I’m used to it so might just not notice it.

To get an idea of how to adapt my cranberry sauce recipe for lacto-fermentation, I found four similar recipes, adjusted them for the same quantity of cranberries (2 cups or 8 oz), so that I could compare them. The adjusted ingredients for each is as follows: