Lacto-Fermented Orange or other Citrus 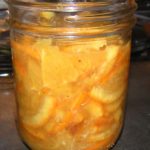 Fermentation is an ancient process that goes back to early Biblical times. It preserves and augments the nutritional elements of the preserved food.

It is recommended to eat 1 – 2 bits of fermented food daily, for a healthy gut. I use the fermented orange to add to my morning smoothie for one of my daily servings. But it would also be good on ice cream, or on its own.

My first attempt at fermenting oranges was Marmalade (originally from Nourishing Traditions by Sally Fallon with Mary G. Enig). The orange needs to be cooked to activate the pectin in the white part of the peel; I cooked part of the orange mix and left the remainder raw. The result was good but didn’t have the texture of marmalade (spreadable, like a jam). So I used it up by adding a bit to my morning smoothie. I like that so much I decided to just ferment the cut-up orange, without activating the pectin.

I use honey for the sweetener, for its flavor and also to take advantage of its ability to minimize seasonal allergies. Note the much of the sugar in the honey is converted to lactic acid by the fermentation process, but enough remains to add a bit of sweetness.

See also Testing Fermented Citrus without Pectin, below. I provide 2 recipe sizes; I started with the 1-pint size to test the recipe.

12/31/17 – 1/6/18; orange:  Made 1-pint size batch with 1 extra-large Organic naval orange, with scant ¼ cup local honey, ¼ tsp powdered ginger, 3 whole, dried cloves and ½ tsp  ground nutmeg; 1 tsp Celtic sea salt; and a mix of 2 tsp brine from last batch with 1 ½ Tbsp water and ¼ tsp powdered culture. The honey is pretty stiff because it’s cool in the house, so set bowl of mixture on top of my pilot-warmed stove (not on the pilot), about 110°F to warm a bit. Packed into a sterilized pint wide-mouth jar; comes about 1 ¼” of top so added no water; screwed on lid, and set on counter, covered with a towel to ferment, 1/1/18, 1 PM. Stirred each day, pressing down again before adding lid. Into fridge on Jan 6. Result: Delicious – not too sweet.

1/27/18; orange: Made 1-pint size recipe as before and set to ferment 1/27. 1/31: signs of fermentation; this batch has more liquid than previous batch, because I chopped the flesh more finely. As delicious as before. Made one more batch but didn’t record.

4/26/18; orange: Made 1-pint recipe as before, chopping flesh more finely. But I had trouble measuring the honey because it was old, too thick and hard to work with. Mixed and pressed down each day; liquid is quite dark; I think I added too much honey. 5/1: first taste-test; way too sweet, and doesn’t have fermented taste. Will leave it on counter for at least 1 more day. 5/2: It floats to the top of the jar, leaving all the liquid in the bottom; not sure why. The sweetness did reduce a bit, the longer it fermented, but the chance of getting alcohol in the mix was too high, so I stirred, pressed down and placed it in my fridge to slow the fermentation. Result: Too sweet for my taste, but otherwise delicious.

9/4/18; pink grapefruit: I’ve made 2 batches with orange peel since the last recorded test, using correct amount of honey and chopping up the flesh more finely. Today I’m going to test using pink grapefruit, following the same method. used 1 soft-ball sized pink grapefruit (avoiding the seeds), ¼ tsp powdered ginger, 3 whole, dried cloves, ½ stick cinnamon, ½ tsp  ground nutmeg, and 1 tsp Kosher salt. It is difficult to measure the honey exactly because it sticks to both inside and outside of the spoon; I used 3 full and rounded Tbsp – should be between 3½ and 4 Tbsp. Used 2 tsp brine from last batch of fermented orange, and scant ¼ cup filtered water to fill the sterilized pint jar. Mixed well, transferred to jar and screwed on lid, then wrapped in dish towel (to keep it dark inside jar), and set to rest on counter. Will check and stir every morning 9/7: Bubbly, so is making alcohol. Gave a good stir and transferred half to a half-pint jar with lid. It has a sweetened grapefruit flavor, but also the bitter flavor of the peel. Transferred both jars to fridge where will continue to ferment more slowly. 9/10: Tasted again; it is no longer bubbling and it’s flavor is mellowing a bit.

8/2/19; orange: 11 AM: Only had 1 smaller valencia orange but followed recipe for a pint because I plan to add another orange later today. Stirred well, put on lid, wrapped in towel and set on counter. 4 PM: Bought another Valencia, prepped only ¾ of it, mixed with earlier batch & returned to jar with lid (filled nearly to top), wrapped in towel and set on counter. 8/5: quite fizzy, so stirred, and placed jar with lid in fridge, to continue to ferment more slowly. Delicious, as always.