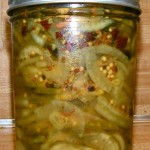 This post includes Bread and Butter Pickles and Pickled Beets and/or Turnips recipes as inspiration for creating your own pickles.

Did you know that in times past, condiments such as sauerkraut, kimche, pickles, ketchup (catsup), marmalade, and chutneys were fermented with lactic acid instead of vinegar (acetic acid)?  And that this fermenting with lactic acid preserves the raw food without the heat of canning?  Sauerkraut is a well-known example of lacto-fermented food.  It’s a shame that recipes changed to using vinegar followed by the canning process, as this process kills the vital elements in the food.

I remember my Mom’s famous dill pickles that she made for snacks at our bar.  She used salt that kept the bad bugs away while allowing the good fermenting bugs (naturally present in the vegetables) to multiply and produce lactic acid, which continued to keep the bad bugs away after the salt was used up. She made them in big crocks and let them ferment in our root cellar, then transferred them to big jars for storage in the bar’s backbar cooler.  She used a similar method for pickling beets. She learned this method when she was growing up in a Danish Children’s Home in Minnesota.  Her pickles were delicious! and in high demand.

Unfortunately, Mom’s recipe got lost somewhere along the way, but I watched and helped her so many times that it’s been a part of me all my life.

Many modern recipes start with fermenting the veggies, but then remove the salty brine and replace it with vinegar for canning. But they are far more heathful if you store them in their brine in your fridge or other cold storage (like a root cellar in the winter).

NOTE: I have used hints from Eat Fat, Lose Fat; or from Nourishing Traditions, both by Sally Fallon and Mary G. Enig, Ph.D. for some of my recipes.

Sally Fallon’s pickling recipes include the addition of whey (from yogurt or cheesemaking) to jump-start the fermentation and ensure a mold-free product, but this leaves a harmless powdery white substance on the top of the fermented product which most people don’t like.  Alternatives:

The grape or cherry leaf is an optional addition to each jar, used to help keep the cucumbers crispy, and to keep molds at bay.  Choose pickling cucumbers if you can find them.  Young salad cucs can be substituted, but the pickles will not be as crisp.  This recipe is surprisingly easy and yields a product with wonderful taste–an excellent digestive– in 2 days! But of course, they will continue to improve in flavor over time, even in the fridge. I like to let them ferment for at least a week before eating and transferring to cold storage.

(Image of beets from Wikimedia Commons)

Commercial pickled beets are made with sugar (or high-fructose corn syrup) and vinegar, and do not provide as many health-enhancing benefits as lacto-fermented beets.  Nor do they have the same wonderful flavor! Beets are a very sweet root and really do not need additional sweetener.

This recipe, based on my memory of Mom’s recipe, flavors the beets with cardamom, a popular spice in Scandinavia, but you can use other spices such as ginger (ground dried root, or fresh root minced).

I jump-start the fermentation using a bit of brine from a previous fermentation, or of beet kvass. Alternately, you can increase the salt but this makes them too salty unless you let them cure for more than a year before eating.

You can use beets/turnips raw, steamed, simmered or baked. I find that cooking them a bit  (not long enough to be “done”) helps them to ferment more quickly, and they are more tender.

Do not use a food processor or grater with beets, as too much liquid is released, which can cause the fermentation to form alcohol instead of lactic acid.  Instead, use a knife or mandoline to slice, julienne, or cube the beets.

Amounts in the following recipe are adapted from Nourishing Traditions by Sally Fallon with Mary G. Enig (1).  The flavoring is from my Mom. Makes 1 quart.  You can increase the recipe to make them in a half-gallon jar, then transfer to pint or quart jars for storage, if desired.

July ’15, Pickled Beets. Used 3 smallish beets in a pint jar. Peeled, then sliced raw, 1/8″. Added more salt because I didn’t have any whey. Let sit on counter 4 days, then transferred to fridge. Did not notice any appreciable frothiness on top of the liquid. Tasted a week later – way too salty and the beets are as crisp as they were before fermenting. Will let them rest in fridge for another 30 days or so. August: gave them a check; still too salty and too crisp. 9/9: Checked on them to see if they had softened and become less salty, but neither had happened. So I poured off about half of the too-salty brine, and replaced with filtered water. Then stirred in some whey and returned to fridge. Will see if they improve.

9/4/15: Pickled Beets. Making ¼ recipe (for a half-pint jar), using 3 medium beets (2″ – 2½” diameter) . Baked unpeeled beets at 300°F; 2 smaller beets were tender after 3 hours, but larger one needed total 3 ½ hours. It was extremely hard to remove the peels, and I lost a fair amount of the beet in the process. I’d intended to slice them but after all the trouble removing the peel, I decided to dice them. Next time, I’ll wrap the beets in foil before baking/roasting; or I’ll lightly steam them; I’ve updated recipe with these options.. (See Katy She cooks blog (2) for Fermented Beets that are peeled and sliced then cooked briefly in boiling salted water before brining). Needed ½ cup water to cover, so added 1½ tsp unrefined sea salt and a shake of ground cardamom to water and 1 Tbsp whey (needed 2 Tbsp for ½ cup water, but 1 Tbsp is all I had, but added more on 9/6, after it had drained off the yogurt. Set in dark corner of kitchen for 3 or more days. 9/8: A bit of froth on top; tasted one. It’s a bit chewy but not hard like the first batch, and has the right flavor. I’ll give it another day in the cupboard before refrigerating. 9/9: Pressed down the  beet cubes once more, then transferred jar to fridge.  Result: 10/10/15: Nice texture, but after a month in the fridge are too salty (but otherwise taste like pickled beets). So I poured out half of the liquid, then replaced with fresh filtered water and some beet kvass (no added salt), and let them sit on counter for 4 days, then transferred to fridge for a year. Thanksgiving 2016: still too salty. July 2017: Still too salty. So I saved a bit of the fermentation liquid for next batch, and added the rest to my compost pile

Next batch will use the saved liquid and less salt. In February 2017, I made a batch of Fermented Apple and Beetroot Relish which was not too salty, so I’ll base my new brine on that.

7/22/17: Pickled Beets. Making small recipe (for a pint jar), using Fermented Apple and Beetroot Relish, Small Footprint Family (5) and LA Healthy Living (6) recipes as a guide for amount of salt in the brine. Simmered the washed but unpeeled beets until just tender, about 20 minutes, then rubbed off the peel, and sliced beets about ¼″ thick. Sterilized pint jar and lid, then packed down sliced beets. Jar is about 2/3 full. Added crushed cardamom, ¾ tsp unrefined sea salt, 2 Tbsp of liquid from last (salty) batch; packed down again and added enough filtered water to cover. Screwed on lid, covered jar with dish towel and set in ‘cool’ spot on kitchen counter (it’s 75 degrees all around my kitchen, but at least it’s in a spot that doesn’t get any sun). 7/23-24: removed white ‘scum’ on top. They don’t stay submerged so sterilized a couple rocks for weights. Will order glass weights. Tasted small bite – beginning to taste like pickled beets and not too salty. Returned to ‘cool’ spot with dishtowel wrap. 7/26: scooped scum again, then placed in fridge.8/1/17: delicious and not too salty.

7/16/18: New batch using 3 medium fresh beets (3″ diameter).  Steamed 20 min, let them cool enough to rub off the peels, then sliced them 1/8″ thick rounds and cut those into quarters. down in sterilized jar with lid. Pressed into sterilized wide-mouth quart jar. Jar is about half-full. Added crushed cardamom, ¾ tsp Kosher salt, 2 Tbsp of combined liquid from recent batch of fermented oranges and 2017 batch of fermented beets. Filled a quart jar about 2/3 full – more than last year. Placed 2 sterilized rocks on top to keep beets from floating, screwed on lid, covered jar with dish towel and set in ‘coolest’ spot on kitchen counter. 7/18: Have not gotten any scum. The liquid is unusually thick; perhaps I didn’t add enough water. After shaking then pressing down each day, I addd a bit more water to keep them covered. And today I tasted a slice. It tastes like I forgot to add the spice, but I didn’t. I added a bit cardamom and some cinnamon, and about ¼ tsp Kosher salt. 7/20: It is chewy, not soft like my previous batches; I could have steamed these large beets longer. It still doesn’t taste like pickled beets, so I mixed in what was left of the 2017 batch, including the liquid, and added another ¼ tsp Kosher salt, and ¼ cup filtered water, then put it in the fridge. I think the problem is that I got twice as many beet slices as previous batches – they overflowed a pint jar, while previous batches fit nicely in a pint. 7/29: beets still are chewy and not as flavorful as past years. I think they need at least another month in the fridge.

See my 'About' page
View all posts by Cat →
This entry was posted in Fermented, Fruit, Herbs, Raw, Root Veggie, Spices and tagged beet, cucumber, fermented, turnip. Bookmark the permalink.