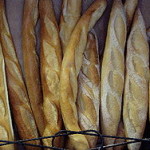 Back in the ’70s I became interested in learning French, so I could read a French menu. Coincidentally, an art-film theatre opened in my neighborhood, featuring French, Italian and other foreign language films with subtitles. I kept hoping some of the languages would rub off on me. One of these films (I can no longer remember the title) has a scene where the main character, a woman, walks into a boulangerie, then walks back out with a long loaf of French baguette over her shoulder. She takes a few steps and cannot resist turning her head to the side, to take a big bite off the end of the loaf.

That scene created a longing in me for authentic French Bread – not the American version typically served as garlic toast to accompany a spaghetti dinner. Not long after this life-changing event, a bakery opened up in my neighborhood, that made authentic French bread in tiled, wood-fired ovens. Oh-my-God! what a treat! Crisp, slightly salty crust, soft & wonderful interior. I was hooked. 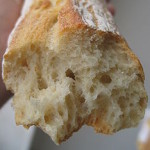 Of course I had to try making this bread at home; I never really got it quite right, perhaps because I did not have the right equipment or ingredients, but the experimentation was great fun.

The first recipe I tried was French Bread (Pain Ordinaire) from The Vegetarian Epicure, by Anna Thomas (3), with ideas from recipes at the Portland library. (See Le Pain Ordinaries for my adaptation] One problem was that my loaves would rise laterally rather than vertically, probably because I could  not find bread flour. So I bought a baking pan with rounded bottom, to contain the sides of the loaf while rising and baking, but I was not happy with that result either. Other problems included:

Eventually I gave up, as it became easier to find baguette in the grocery store – not quite as good as what I had from a real French bakery in San Francisco, but good enough. And by the ’90s, bakeries featuring rustic and French-style breads, with wood-fired brick ovens, opened up in my neighborhood.

Now that I’m living in rural Montana, real baguette is not so readily available – it’s more like what I could find in Portland in the ’80s. So I’d like to try making it again – and now I can get hard wheat flour (Wheat Montana’s Prairie Gold white whole wheat) as well as unbleached white bread flour. And I have a gas oven which works better for breads than electric.

This recipe is adapted from Fine Cooking.com, originally by Allison Ehri Kreitler (1). She suggests her 6-mini loaves are a good way to start, because it gives you 6 opportunities to practice the art and get it right. Check out the original recipe for great photos of each step in the process.

She also suggests that for best results, you should weigh the flour and water, rather than use volume measures. [Ah, yes, this is another reason why my early attempts failed – I didn’t have a good kitchen scale, so I used unreliable volume measurements.] This is something not typical of American recipes, but I do agree it is more accurate. Once you get the hang of it, and know what the dough feels like when the flour and water are in proper proportion, you can do this by feel, rather than weighing.

The recipe produces a very sticky dough, typical of European rustic breads.  When working with the dough, lightly flour your fingers, just enough to keep the dough from sticking too much. Avoid adding too much flour as it will spoil the texture and rise of the final loaf. [And this is another reason why early attempts failed – I worked-in too much flour in attempt to get past that sticky stage.]

The list of ingredients is very short – a sign that this is an authentic recipe. I recommend making this with all white bread flour the first time, to get the hang of it (Gold Medal or King Arthur were tested by the original author). She cautions that artisan bread flours typically have a higher protein content and may require more water, so best not to use that your first time; same is true for most whole grain flours. After you get the technique down, you can try artisan flours, adding whole grain flour, or even a whole-grain flour pre-ferment (see the ciabatta recipe for hints on the pre-ferment method).

Do not use all-purpose flour for this recipe. You need hard wheat flour, preferably unbleached. I don’t recommend bread flour because it contains toxic bleaching ingredients (bromine).

For preparing pans for baking: use Organic cornmeal to avoid GMOs; Bob’s Red Mill brand cornmeal is GMO-free, per their statement on their website. Or use semolina flour (I buy this in bulk at our local Organic store, Mountain Valley Foods). See Wheat (about) for more about semolina.

Two methods to provide steam in the oven

A moist baking environment is essential for the cripsy crust of baguette, and of rustic breads. Some newer ovens have a feature to provide steam in the oven. If you don’t have such a feature, there are two ways to provide steam while your bread bakes.

This is the method from the Fine Cooking recipe (1). I have tried this method, but I think the second method (below) works better)

This method is mostly from The Fresh Loaf’s recipe for ciabatta integral (2),but rather than using boiling water as per The Fresh Loaf, I use ice water (it will quickly steam in the hot oven), as for Ciabatta and rustic breads. See also my recipe: Ciabatta Integrale (whole grain).

Caution: Use oven mitt that covers lower arm, while adding water to pan.

See my 'About' page
View all posts by Cat →
This entry was posted in Baked, Flour, Grain, Leavening and tagged hard wheat flour, semolina, semolina flour, yeast. Bookmark the permalink.