GMO foods, and How to Avoid Them 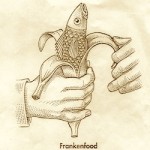 By Cat, Nov 2007; updated and re-published in May, 2018 (Image, right, from the Organic Consumers Assoc or OCA, used with permission)

GMO means Genetically Modified Organism, and has become the most commonly-used term for Genetically Engineered (GE) foods. Another term proposed by the USDA for a new labeling law (2018) to replace GMO or GE, is Bio-Engineered (BE). But this change is designed by big Ag to hide the fact their product contains GMO ingredients. If you avoid GMOs, please help educate your friends that BE means the same as GMO or GE.

The method used to produce these GMOs/BEs is not the same as hybridizing by breeding within the species or family, but rather produces non-natural plants and animals.

The most common GMO foods are “Roundup-Resistant” which means they are sprayed with Roundup to kill the weeds, without killing the GMO crop. Unfortunately, the GMO crop does take-up the Roundup, which is then spread throughout the plant, including its roots, so that when you consume the crop, you consume Roundup.

Side Note: Some non-GMO grains, such as wheat and oat may be sprayed with Roundup as a “desiccant” just before harvest to kill the crop so that it will dry faster for easier harvest. Buyer beware! See Natural News Article: “Quaker Oats sued over glyphosate found in its ‘all natural’ oats” (8).

GMO means Genetically Modified Organism; another name is GE for Genetically Engineered. But the USDA has proposed a new, unfamiliar name as part of the new mandated 2018 labeling law is BE, for Bio-Engineered.

A prime example of genetic engineering is Roundup-Ready seeds.  These GMO crops are engineered to survive spraying by Roundup, whose main ingredient, glyphosate, kills weeds and other species growing in the sprayed area. These GMOs were created when a weed was discovered to be resistant to Roundup. Scientists determine which part of the weed’s genes were responsible for this resistance, then inserted that specific DNA into the DNA of the desired crop, for example, corn. And voila! the crop became resistant to the killing effects of Roundup, while weeds that crop up in the cornfield become sick and die.

But this doesn’t mean the corn wears a raincoat that keeps it from absorbing the poisonous Roundup.  No.

It means the corn takes up the Roundup into its system without succumbing directly to the poison.  Then, when you eat the corn (or products like cornmeal and cornstarch made from the corn), you ingest the poison.  And you also ingest the genetic makeup that allowed this resistance.  Who knows what horrors can result from this?

To complicate this further, over time, the sprayed crop and future crops grown in the same soil, will be negatively affected by the glyphosate in Roundup because glyphosate is a patented antibiotic. That means that it indiscrimately kills the important soil microbiome that otherwise helps the plant to take up nutrients from the soil, a condition called “root-rot.” See my article on The EssentiaList: “Food Evolution”: New GMO technology even worse than Roundup-resistance for more on this and other, newer issues.

NOTE: This list is from 2007; it will become a longer list as more crops are genetically engineered. Plus other, newer GMO crops have been developed to be resistant to other weed killers, or to kill pests.

A GMO farmed salmon has been developed by AquaBounty Technologies, but as of 2013, had not yet been approved in the US or Canada. The AquAdvantage salmon was developed by inserting genetic makeup from an eel into the growth hormone-regulating gene of a salmon, enabling the salmon to grow year-round instead of only during spring and summer. In other words, so that it will grow faster than natural salmon.

An anti-Ebola drug has been developed by ZMapp using a GMO technology called agroinfiltration. Note that this drug is not the only one produced by this method; other examples are drugs/vaccines against West Nile virus, dental cavities, common cold virus, anthrax, MERS, and the flu.  From my article on The EssentiaList: Ebola cure from ZMapp: another type of GMO:

“This is the technique used to produce the antibiotic against Ebola by the drug company ZMapp. While a similar technology can be used to force animals (rats, etc.) to produce the drug, the Ebola drug is produced by a tobacco plant. NOTE: this is not the same variety of tobacco used to make cigarettes, but rather a close cousin. Tobacco plants are especially useful for this type of research and production because they were one of the first crops to be GMO, so a lot is known about them and how they work. Furthermore, tobacco plants are natural chemical factories, producing nicotine which is toxic to tobacco’s pests.”

Many brands of garden seeds are potentially GMO. But some companies have signed the Safe (non-GMO) Seeds Pledge; similarly, certified Organic seed companies are also non-GMO. You can find links for these companies on the Institute for Responsible Technology (IRT) website (5b).

If you keep a garden, I highly recommend buying from those companies that do not sell GMO seeds.

The Future of Food (a Film Video)

Learn about and/or purchase this important 88 minute documentary by Deborah Koons Garcia, on The Future of Food.com website (6), and watch a 2-minute trailer of this 2004 film (6).  You can learn more on Mercola’s website (3).

How to Spot GMO Foods at the Store

Until labeling of GMO foods is mandated, there is no way to be certain which foods are GMO or contain GMO ingredients. Plus that new law may not use the terms GMO or GE at all, replacing them with BE (Bio-engineered) because of its unfamiliarity (meaning that people won’t know that it means GMO and will think it is OK to consume).

Until clear GMO labeling is mandatory on foods, learn to read the PLU (Price Look-Up) codes on produce (see below for more). And beware of the following:

As of this writing, GMO foods are hard to spot because they are not required to be labeled as such.  Foods that are definitely not GMO usually state so proudly on the label.  Dr. Mercola writes, “you have a 75% chance of picking a food with genetically modified ingredients when you’re at the supermarket.  This is because at least 7 out of every 10 items are GMO.” (3). Note this was in 2007; the statistic has undoubtedly increased each year since then.

The most common food ingredients, especially in processed foods, that are likely GMO are (3):

The Arctic Apple is a GMO fruit that will not brown when cut up. That may sound harmless, but it works by deactivating an essential enzyme in the apple, and may also affect human enzymes.

The following ingredients are also highly suspect as GMO, because, for the most part, they are made from the foods listed above (per Dr Mercola) (3):

How to Avoid GMO Foods

Examine the produce stickers for the PLU code (Price Look-Up code),* to decipher which are Organically gown:

‘*A PLU, or Price Look-Up code is a system of numbers that uniquely identify bulk produce sold in grocery stores and supermarkets. They are used at check-out to determine the price of a produce item. If you want to ensure a produce item is not GMO, look for a 5-digit code beginning with ‘9’.

See my 'About' page
View all posts by Cat →
This entry was posted in Beef, Buffalo, Eggs, Fat or oil, Fish, Fruit, Grain, Pork, Poultry, Sweetener, Veggies and tagged GMO. Bookmark the permalink.