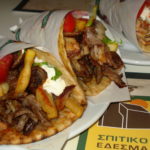 Gyro is one of my favorite Greek foods, but I’ve never made one for myself. Upon seeing this recipe online (1) I’ve decided I have to try making one! But first…

Gyros (gyro) is pronounced “yee’-rohs” (yee-roh), with a slight roll of the tongue on the ‘r’ in the second syllable – at least, that’s the way my Greek friends taught me to say it. But you can just pronounce it without that roll.  Note that gyros is singular and gyri (“yee’-ree”) is plural. See Stavros’ Stuff for a true Greek pronunciation, and for an explanation of the difference between gyros and gyro.

It is a cooked mix of ground meats and herbs that can be rolled flat and thin for a gyros sandwich (more on this below), or into balls for meatballs. Greek restaurants cook it on a hot, rotating cylinder, but you can bake it in your oven, or cook meatballs/burgers in a heavy cast iron pan on stove-top. This recipe bakes it in an 8″ x 4″ loaf pan, then sliced thin for use in a gyros sandwich.

As a sandwich, it is wrapped in pita bread, with lettuce, tomato and tsatziki sauce. The photo above includes fries, but that is an Americanization.

This recipe is adapted from one by Mel Hayes in Rural Montana Magazine (the Magazine of the Montana Electric Cooperatives Association); April 2020 edition, with suggestions from All Recipes (2). Also, for alternate method of baking the meat mix, see the All Recipes (2) recipe.

This version uses a mix of lamb and beef, but you can use just lamb or just beef, or include bison or other red meats.

This is my own recipe, based on all the wonderful gyri I’ve had over the years. See also The Spruce Eats (3) for a video that includes making and cooking the gyro meat, and packing the pita for the sandwich.

See my 'About' page
View all posts by Cat →
This entry was posted in Uncategorized and tagged beef, Greek, lamb, meatballs, pita, tsatziki. Bookmark the permalink.