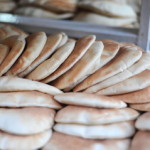 Pita (pronounced PEE-tah), also called ‘pocket bread’ is a staple in all of the eastern Mediterranean countries.  Now, if your exposure to Pita is from a bag at Trader Joes, you have not tried the real thing.

There’s a wonderful hole-in-the-wall Lebanese restaurant in Portland OR, called Nicholas (6) that makes pita to order.  They bake it right there in their oven; when they bring it to your table, it is steaming and all puffed up like a balloon.  As it cools, the balloon collapses.  You may have encountered this in other cities, maybe not.  There just is nothing as good as this, except perhaps for fresh Lefse – Potato Flatbread from Scandinavia.

I prefer whole grain breads, and pita is no exception. I created my recipe based on recipes from four different websites, by comparing ingredients, amounts, and procedure (See below for Comparison of Pita Ingredients).  I have not yet tested my recipe.  I’m so enamored with my Naan (Traditional Indian Tandoori Flatbread) recipe that I never got around to testing my Pita recipe. I’d like to revise it to a 12-hour (overnight sponge with lemon juice to break down the phytates in the flour, similar to my naan recipe).

Pita is very similar to Naan, in the making, taste and texture.  The main difference between them is that naan is made with yogurt, so is softer and more moist; pita just uses water as the liquid, so is drier.  Also, naan is usually flavored with coriander or another spice.  Both should puff into a balloon, with an air pocket in the middle.  However, I cannot get my naan to puff, and I fear I’d have the same trouble with pita.

Notes on Ingredients and Equipment

Refer to Flatbreads: Note on Ingredients & Equipment. Below are some notes specific to pita.

Most recipes call for a very hot oven (450° to 500°F), which I believe is correct.  Others call for a moderate oven (3500F), but the breads are much less likely to puff at this temperature.  But, each oven is different, and you must experiment with yours. 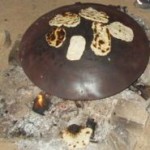 Instead of using the oven, you could cook your pita on a griddle (photo, left, from Wikimedia commons).

When I originally wrote this recipe, I followed the instruction of the all whole-wheat recipe from Seeds of Knowledge, but modified the ingredient quantities for a ratio of 2 parts flour to 1 part water.  Then I altered the instructions to add half the flour at the sponge stage, and the remaining in part 2 (according to the method from the Vegan Feast Kitchen recipe).

See below for a comparison of ingredients between the four reference recipes.

I’ve not yet tested this recipe, which makes 12 pitas, about 5″ in diameter.

My research for a whole-grain pita recipe led me to four web recipes, most of which use white flour, and some of which provide excellent photos of the process, as noted:

I created my recipe based on the above list, comparing ingredients, and amounts, as in the following chart: 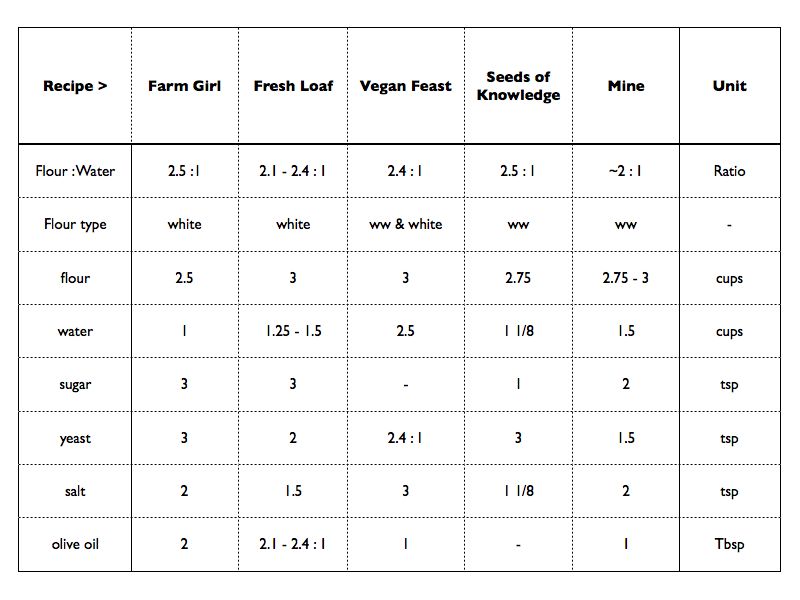 A flour to water ratio greater than 2:1 is perhaps too dry if all whole wheat flour is used; hence my recipe is roughly 1.8:1 to 2:1.  For some recipes the sweetener (to feed the yeast during proofing) is sugar and for others it is honey; honey would be more authentic.

I added a sponge-rise to the recipe, based on sponge method Tassajara Bread Book (whereas only the Vegan Feast recipe comes close to a sponge, with a 30 minute rest).  I extend this to 2 hours, but would like to test an overnight sponge in the refrigerator (as for Traditional Focaccia (Italian Flatbread)), perhaps using a slightly acidic medium by adding a bit of yogurt, whey or lemon juice.

See my 'About' page
View all posts by Cat →
This entry was posted in Baked, Fat or oil, Flour, Griddle, Leavening, Sweetener and tagged honey, olive oil, salt, wheat, yeast. Bookmark the permalink.