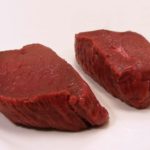 This last fall, I bought a share of a buffalo from friends who also hunt.  When my share arrived, it included elk and deer steaks from their fall hunt, in addition to buffalo.  I like venison but don’t have much experience with it, other than my Roast Reindeer recipe (for which I usually use either beef rib roast or leg of lamb, because reindeer – or its North American cousin, caribou – is hard to come by here).

One venison (Elk) recipe recommends marinating in an Italian dressing before cooking; another similar recipe adds a green peppercorn sauce; I’ve adapted both here.  Another option is to sear the steak, then deglaze the pan with brandy and herbs, adding sour cream to make a sauce.  I include my versions of each here.

I like the idea of the tenderizing marinade of this recipe, so will probably do that no matter which sauce I choose.

This recipe is adapted from Food.com’s recipe for  Grilled Elk Steaks (1) (originally on RecipeZaar).  The Green Peppercorn Sauce is from cd Kitchen (2).

You can use a commercial vinaigrette but they typically contain GMO oils (canola, soy, etc.). I have several different vinaigrette recipes on this blog to choose from for different flavors. My favorite is Balsamic Vinaigrette, but feel free to experiment.

Keep in mind that the ‘wild’ flavor of venison is greatly tamed by other flavors in the dressing, such as spices.