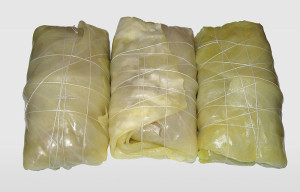 I’m more familiar with cabbage rolls from Eastern Europe, but this recipe from Lebanon appeals to me, for its different flavors. Actually, some type of cabbage roll is found in most ethnic cuisines – or something similar like stuffed grape leaves from the Mediterranean.

Many people claim they don’t like lamb, but I contend they’ve never had it seasoned properly. The spices used in this recipe work very well with lamb. However, if you just can’t embrace giving it a try, use ground beef or venison, or even turkey.

This recipe is adapted from Eating Well (1); serves 4 (2 cabbage rolls and 2 Tbsp sauce per serving). For more about bulgur, see Wheat (about), and scroll down to ‘Bulgur & Bulgur Flour.”

The original recipe has you remove 8 leaves and soften them by cooking in simmering water, and reserving the remaining leaves for the pan. However, it can be very difficult to remove the leaves from closed-head cabbage, when raw. The solution is to:

NOTE: you can make ahead up to this point; however, do not add the egg until ready to continue. Refrigerate cabbage and stuffing separately, up to one day.