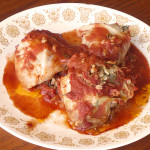 Cabbage rolls (called golabki in Poland, and golubtsy or golubtsi in Russia and Ukraine) are common family food fare, especially in Eastern Europe, and are often made without meat, similar to stuffed grape leaves in the Mediterranean.  I provide two different vegetarian versions, and a meaty version.

I usually find I have more filling than leaves to fill.  That’s OK, I just stir the leftover filling into the tomato sauce and pour it over the stuffed leaves.  You can also chop up some cabbage leaves and stir them into the sauce.

I provide two different vegetarian stuffing, and instructions to convert each to a meaty stuffing.  These recipes serve 4 – 6.

This vegetarian recipe is adapted from A Passion for Vegetables by Vera Gewanter.  She says it is a composite recipe from various European countries.  I’ve added a few herbs, spices and pine nuts to the original recipe, based on suggestions from Nourishing Traditions by Sally Fallon. I provide a lot of detail, but it is easier to make than it seems.

Because this recipe does not offer a full complement of protein, it is best used as a side dish, or accompanied with wedges of a good, hearty cheese.  If you add lamb as in my Meaty Variation, it can be served as a main dish.

While I would prefer the greater nutritional value of brown rice, I’ve recently learned that the rice bran is likely contaminated with arsenic (from fertilizing cotton plants that formerly grew in the soil). So unless you trust your source of brown rice, I suggest using white rice. [Jun 2014 update: Another option is to use bulgur; see the second stuffing recipe which uses bulgur.]

I use my own homemade tomato sauce, which I make up in batches and freeze in half-pint and quart jars. Commercially canned tomato sauce has toxicity issues: formerly from lead in the solder that holds the can together, and more recently from the plastic used to coat the interior of the can; both lead and plastic toxins are more likely to leach into acidic foods like tomatoes, than into alkaline foods like beans and peas. If you can find commercial tomato sauce sold in glass jars/bottles, that would be safer.

I don’t care for raisins, so I use currants which have another advantage: they are smaller than raisins, so work better in the stuffing. If you use raisins, chop them in half.

Don’t forget to add the egg to the rice mixture before filling the cabbage leaves – it helps to hold the stuffing together.

Same as for Vegetarian Rice & Mushroom Stuffing recipe except:

Follow recipe for vegetarian version with the following changes: