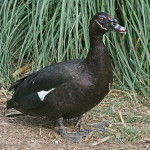 I finally found a frozen duck breast at my local grocer and just had to buy it; now I get to decide what recipe to use. I love duck with any kind of fruit sauce, so I’ve decided to give this recipe a try, since I LOVE plums.

It uses plum preserves, and of course, it’s best to make your own (for the healthiest ingredients). I’ve chosen a recipe from Epicurious (5) that makes about 1½ cups preserves (from 1 lb dried plums); it is quick and simple, and the end product can be frozen rather than canned.

I’ve included my test recipe for the plum preserves (using dried plums/prunes) below the duck recipe. If I like the results, I may move the full  recipe to its own page.

This recipe, adapted from a Fine-Cooking recipe (1a), provides ingredient amounts for 2 duck breast-halves, with amounts in parenthesis for 1 duck breast-half. Depending on the breed, each half-breast half can weigh between 8 and 16 ounces; I’ve adapted recipe for 8-10 oz breast halves.

About Ingredients and Method

Brining the duck: I highly recommend brining the breasts because it helps retain moisture in the meat. If you do brine them, you will  not need to add salt (tho it can be added at the table).However, I’m not sure about about the amount of salt per cup of water for brining a duck, nor about the time to let it sit in the brine (in the fridge).

The Outdoor Hub article about brining a duck (6) suggests different amount of salt and brine time than my chart:

Soy sauce: The original recipe calls for reduced-sodium soy sauce. Because most soy sauce is made from GMO soy, I prefer to use either of the following:

Plum or other preserves: If you can’t find plum preserves, try cherry or red-currant preserves, or make your own. I’ve included a Quick Plum Preserves recipe (below), which is more like a thick sauce, and works well in this recipe.

Serve the duck with Steamed Jasmine Rice (1b) or my own steamed wild rice recipe. Fine Cooking also recommends accompanying with some seared baby bok choy which is hard to find here in my rural community, so I will serve with braised kale or Brussels sprouts.

I have an Italian plum tree (the variety used to make prunes), but the fruit is not-yet ripe as of this testing, so I will reconstitute dried plums as the main ingredient in the preserves, using instructions from WikiHow (9). RULE OF THUMB: Generally, 1 cup of dried fruit will make approximately 1½ cups of reconstituted fruit (10,11) (or ½ cup (8 Tbsp) dried = ¾ cup (12 Tbsp), reconstituted).

The preserves recipe is adapted from an Epicurious recipe (5) that can be refrigerated up to a week, or frozen instead of canned, to retain its nutrients. t takes about 2 hours to make (including rest-time).  The original makes 2½ cups; I’ve adapted it for about ¼ cup (amounts in parenthesis), for testing and to use in the duck recipe above (using one 8-oz duck half-breast).

Amounts are for 2½ cups preserves, or (⅓-⅔ cup preserves in parenthesis); I’ve not yet tested the larger amount, but see “Testing” below for the smaller amount.

‘** WikiHow suggests adding another inch (2.5 cm) above the dried fruit when you first cover with water, but I think it’s better to check every few hours and add more water only if needed. Some instructions suggest using boiling water to cover the fruit; in that case they will plump up sooner _ hours/minutes. However using cool water and allowing them to soak longer provides better results.

7/21-22/20: I will make a small batch of the preserves, as I only need a tablespoon or less for a single-breast duck recipe, and I rarely eat preserves because I’m doing keto. I used 1 oz of dried plums (which should fill between ¼ and ⅓ cup when chopped); there should be enough left for another breast another time. …. Covered with water and into fridge at 4:30 PM 7/21/20. Removed next morning at 11 AM; they have plumped up nicely, and soaking water is colored from the plums. I will save the water to use when cooking the preserves. Made ~ 2 Tbsp chopped reconstituted plums, half of what I intended. Mixed with scant 1 tsp sugar, 2 Tbsp water (saved from soak), and a small section of a cinnamon stick. Simmered about 25 min. Got just shy of ¼ cup. Next time, I’ll double amounts for the preserves (to make ⅓-⅔ cup of preserves), and I added that as an option to recipe above.

See my 'About' page
View all posts by Cat →
This entry was posted in Uncategorized and tagged brining, cherries, currants, duck breast, plums, soy sauce, tamari. Bookmark the permalink.