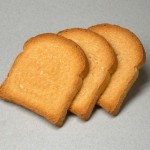 Called skorpor in Denmark and zwieback in Germany, rusk is used throughout western Europe mainly as a breakfast item: dipped into coffee, or broken into a bowl and eaten as a cereal with warm milk and butter.  Another use is as a baby teething food. It can also be used to make a delicious crumb crust, as in my recipe for Æblekage (Danish Apple Cake).

Rusk is an excellent keeper (provided you dry it thoroughly after baking); make batches in the winter when you like the warmth of your oven, and store for use on hot summer days.

My first recipe is a yeast-risen bread, baked twice; I would love to adapt this to sourdough (once my sensitivity to sourdough is balanced). The second recipe is for almond rusks, which resemble Italian biscotti, and is made not with yeast, but rather  baking powder as leavening.

Note that Nabisco brand Zweiback (photo, left, from Amazon) is no longer available. If you have a recipe that calls for a ‘packet of  Zweiback,’ how much would that be?

I’m inclined to use 4 oz of zwieback or rusk crumbs.

This recipe, adapted from Wonderful Wonderful Danish Cooking by Ingeborg Dahl Jensen (1), makes one 4″ x 8″ loaf.  I use whole hard white winter wheat flour (such as Wheat Montana’s Prairie Gold, and organic unbleached white flour (see Wheat (about), for more info). How do you know when it has risen enough (doubled in size):

I made a loaf in Dec 2008, and used half for my annual Æblekage on Christmas Eve. The other half I put into a plastic bread bag to store in a darker corner of my kitchen counter, planning to eat it one slice at a time at breakfast. However, it sat uneaten the entire year, and was still good for my Christmas 2009 Æblekaga.

* If using spelt, it requires less moisture for equivalent amount of flour than wheat. Adjust texture by increasing amount of spelt flour or by reducing amount of liquid in the recipe. Spelt also works up (achieves optimum rise) faster than wheat.

Testing 102612: Used whole and unbleached white spelt flour for this test. Spelt requires less moisture for a given amount of flour than does wheat. Used 1 ½ c whole spelt and about 1 ¼ cup white spelt before first rise, and another 2 Tbsp white spelt when shaped loaf. First rise was about 50 minutes (I tested by pressing 2 fingers into dough; the depressions did not fill in, indicating doubling in bulk). Second rise about 1 hour – way faster than I expected. Bread has wonderful flavor and crumb, but it tends to fall apart just below the top crust on one side. Sliced 10 slices plus 1 heel that I ate; into warm (but off) oven to dry.

Testing 120512: Wanted to make this with less sugar for sandwich bread – no drying in oven after baking. So made as written except used only 1 Tbsp sugar, total. Used 1 ½ cups whole spelt to beat 100 strokes, then added ½ cup unbleached white flour (wheat) and another ½ cup during kneading & shaping, total 1 cup white flour. This definitely is a lively mix! Set to first rise at 10:05 AM; had doubled (2-finger test) at 10:50 – only 45 minutes. Shaped into loaf, placed in buttered pan and set to rise at 10:55. It had risen well above the pan at 11:35 so into the oven. Never did get to 200 F but took it out after 55 minutes total baking time (45 min at 350). Nice crumb begging to be dried to rusk. Not as sweet as the last batch, which is what I’d intended.

I think in future will use only ½ Tbsp yeast, as original rose too fast.

Making up a soft sponge to presoak the whole wheat flour makes the grain much more digestible, and makes its minerals more absorbable. However, I’ve found that presoaking for a yeast-rise recipe doesn’t work well, as the soaking breaks down much of the gluten, which is so important for supporting a yeast rise. Therefore I’ve decided not to adapt the recipe for a pre-soak. Instead, when I can eat sourdough again, I’ll adapt this recipe for sourdough rise.

This is a quick-bread type recipe, using baking powder instead of yeast as leavening agent, and resembles Italian Biscotti. I’ve adapted this from Wonderful Wonderful Danish Cooking, by Ingeborg Dahl Jensen.

The original recipe did not include any liquid, but I want to adapt this recipe for a pre-soak method (works well with baking-powder leavened recipes), and that requires acidic liquid like yogurt or buttermilk. To counter the added liquid, I substitute equal amount of the flour in the recipe with coconut flour, which absorbs the liquid during baking. If you want to omit either the milk or the coconut flour, you must also omit the other, and increase the unbleached flour accordingly.

* NOTE:  you can omit the coconut flour, but then you must also omit the milk, and increase the unbleached flour to 1 ½ cup (or the pastry flour to 1 ¾ cup)