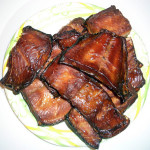 When my parents both worked the night shift at our bar, and came home late, around 3 AM, they wanted breakfast. Waffles or smoked salmon hash were my favorites, but I’ve never made the hash for myself. So I was quite tickled to see this recipe in the Fine Cooking newsletter. I haven’t tried it yet, but will soon – as soon as my local grocer smokes more salmon.

This recipe is adapted from Fine Cooking, originally by Liz Pearson (1).