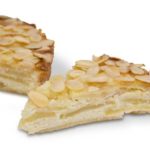 When I saw this in the weekly Nutrition Action newsletter, it reminded me of the apple-almond desserts in the Scandinavian countries I visited in 2006. Every community has a different version and each is delicious. In Bergen, Norway, I tried one very much like this recipe, so of course I have to try this one. (See Cat’s Blog: Bergen and Bryggen). This version is very similar to my Apfelkuchen recipe (in the German tradition), except Apfelkuchen uses all grain flour (no almond meal), apple halves/quarters are not sliced all the way through, and it doesn’t have almond slices on the top.

However, I don’t always agree with the nutritional recommendations of Nutrition Action, as they focus on low-fat ingredients, so I’ve updated my version to my preferences. For example, the original recipe calls for “2% milk;” I’ve updated that to “fresh whole milk, or ¾ cup whole milk, ¼ cup cream” in my version).

I also give instructions to make this recipe dairy and/or gluten-free. 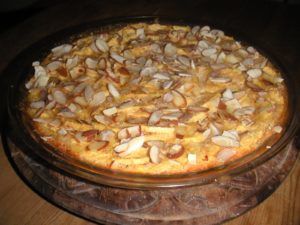 This recipe is adapted from one by Kate Sherman on Nutrition Action website (1). It is similar to Clafoutis, in that it is a custard with wheat flour added and poured over prepped fruit. The flour gives the pudding a cake-like texture with the richness of a custard. But this recipe uses a mix of wheat flour and almond meal (flour).

Grain flour: I use whole wheat pastry flour or whole spelt flour (or sprouted  versions) in combination with almond meal/flour. Sprouted grain flour is a better version, because sprouting breaks down the toxic lectins (such as WGA), and partially breaks down the gluten; most people with Celiac or gluten sensitivity can tolerate sprouted or fermented grains.

Whole spelt flour is very similar to whole wheat pastry flour (both are soft grains), but spelt usually requires less moisture or more flour because it isn’t as dry as wheat. I think the batter was a little too moist when I tested sprouted spelt, but I didn’t adjust moisture for my first test.

Now that I’ve discovered a Montana company that makes sprouted grain flours: Granite Mill Farm (2), I started testing their flour in this recipe (See testing below for details):

Coconut flour: This is an alternative to grain flour, especially if you have a problem with gluten, is to use coconut flour. Use commercial coconut flour (such as Bob’s Red Mill brand), or left-over shreds from using dried, shredded coconut to make coconut milk. For details, see Coconut (About), and scroll down to section on “Coconut Flour.” See also Coconut Flour (on gluten-free flours and starches menu).

I tested using commercial coconut flour instead of gran flour, and coconut milk instead of dairy milk on April 28, 2017  (see Testing, below). Or you could make your own coconut milk and coconut flour from a whole coconut, to use in place of dairy milk and wheat flour (See the section: “Coconut Milk from Dried Shredded Coconut” in my Coconut Milk posting for details).

Quinoa flour is another alternative to grain flour, but I don’t plan to test it.

Almond meal/flour: This flour is used for both texture and the almond flavor in the cake; I use Bob’s Red Mill brand. An alternative would be to use coconut flour and add more almond extract, but I’ve not tested that.

Sweetener: I prefer to substitute stevia extract powder for part of the sugar, but I give the all-sugar amount as an option.

Almonds: If you can find sliced sprouted almonds, that would be your best option; slicing your own sprouted almonds can be a challenge. Otherwise, I recommend presoaking then drying the sliced almonds before using in this recipe, to optimize the nutritional value of the nuts.

Apples: Using two or more varieties of apples generally improves the flavor of apple desserts. For recommendations, see the table of apple varieties in Apple Info (About). My personal favorites for cakes are Golden Delicious, Jonagold, Honeycrisp, and Rome Beauty. After peeling and coring, you can slice in half lengthwise then each half horizontally into rings; or vertically into thin crescent wedges.

Milk/Cream: My preference is raw milk with cream at the top (shaken before measuring). But if you have a problem with dairy, consider using coconut milk. If you make your own coconut milk, dry the fibrous shreds left over after the milk/cream had been extracted, to make coconut flour which you can use instead of grain flour. See the section: “Coconut Milk from Dried Shredded Coconut” in my Coconut Milk posting for details.

Combine the following in blender and blend until well-mixed, then transfer to a Mason jar for storage. Makes 1 cup.

Or 1 cup of less rich version:

1/8/17: Using 9″ round Pyrex cake pan, with 1Tbsp butter on inside bottom/sides of pan, and 1 Tbsp Rapadura sugar in bottom. Cut 2 peeled apples (1-honeycrisp and 1 golden delicious) in half lengthwise to core, then cut the halves crosswise into less than ¼” thick slices. Started laying them around pan bottom near sides, overlapping until reached center of pan. It only took one of each apple variety (2 total); perhaps I should have sliced them thinner to use more. I’m concerned that 3 large eggs will be too many after apples fill half way up pan…so used 3 medium eggs. Used ¾ cup milk and ¼ cup cream; and ⅛ tsp stevia/1 Tbsp maple syrup combo to sweeten. Otherwise as written. It took more than ¼ cup of sliced almonds on the top, closer to ½ cup. Into preheated oven 325°F at 5:20 PM. Checked at 6:15 PM; still moist in center. Almost ready at 6:22 PM. Cake is done at 6:25 PM, but almonds have not started to brown. I removed to cool anyway at 6:25 PM; 65 minutes total. Result: It rose during baking, then fell a bit while cooling, typical of egg-risen cakes. It has good almond-apple flavor, and has a nice cake texture (unlike a clafoutis), probably due to the almond meal. It is not overly sweet (I used less sweetener than the original recipe’s sugar). But the apple slices are definitely too thick, making the cake a bit chewy. I’ve updated the recipe accordingly, to slice apples less than ⅛” thick. However: After it rested in the fridge overnight, the apples had softened and melded with the cake giving it a bit more custardy texture. I LOVE this recipe! Next time: slice apples more thinly..

1/29/17: Used ingredients as written, with following differences in ingredients: 1 golden delicious and half of a honeycrisp sliced into crescents about ⅛″ thick using my mandoline; ¾ cup milk and ¼ cup heavy cream; 3 large eggs; ⅛ tsp stevia with 1 Tbsp maple syrup and no sugar. This batch of almond meal/flour was finer than for previous batch and tended to clump; perhaps should have mixed in my blender – will try that next time. Baked 55 minutes then cooled on counter before chilling in fridge overnight. Result: As before, rose during baking then fell a bit.

Feb 2017: Made as before using 1 golden delicious, ½ large honeycrisp, stevia, maple syrup. Forgot sugar before adding apples. Mixed batter in blender. When poured it over apples, the ones on the top layer floated to top, and consequently did not meld as well with the custard.Otherwise as written, baking 55 min when it tested done; but as it cooled, the uncooked custard bubbled up so put it back in oven for 20 min (to let it heat up again) and removed then removed. Result: Not as good as previous; the apple slices on top are tough – not fully cooked – making it hard to cut the cake.

3/17/17: Used 1 ½ Golden Delicious sliced a bit thicker than last time; otherwise as written using stevia and maple syrup (no sugar), and using whisk instead of blender. Forgot to sprinkle sugar on butter before adding apples. Into 325°F oven (to join braising corned beef for St. Paddy’s day) at 5:45 PM. Tested at 6:45: seems done but I got fooled last time so will let it bake another 5 min – almonds not browned yet. Removed to cool at 7 PM, total 1 hr, 15 min. baking time. Result: This time apple slices did get tender and melded with the custard; the cake cooked ‘done’ to perfection. Delicious, and I didn’t miss the sugar on the bottom.

4/28/17: Today I tested using coconut milk (made from dried, shredded coconut meat) instead of milk/cream, and coconut flour (the fibrous shreds left after extracting the milk from the dried coconut) instead of wheat flour. Otherwise made as last time (3/17/17). Oops, I baked 55 min at 350 instead of 325. Result: Unfortunately the apples rose to the top during baking, probably because I forgot to add sliced almonds on top…. After it cooled, I tasted a serving – delicious with a slightly different texture. The apples on top softened (unlike with my first testing), and the lower apples blended into the custard. But I missed the sliced almonds on top.

8/27/19:  Buttered pan and sprinkled with Rapadura. Sliced 1 Organic Fuji apple into crescent less than ¼″ thick using my mandoline, and arranged them, slightly overlapped, in rounds. Mixed batter as instructed (using stevia extract powder and maple syrup); unfortunately I used regular whole wheat flour instead of the sprouted flour I’d intended. Into oven at 6:40 PM; checked at 7:35: toothpick test indicates it is done but almonds have not started to brown. Check again at 7:40; done, so removed from oven to cool a bit. Result: Tasted small wedge at 8:15 PM: delicious. Apples have pretty much dissolved into the custard; almonds are lightly browned and chewy. Not too sweet.

9/11/19:  This is to test using sprouted whole spelt pastry flour. Followed instructions as before and remembered to sprinkle buttered pan with Rapadura. Used stevia powder and maple syrup as the sweetener as before. I used 1½ Fuji apples (I overlapped the slices more, to use more apple), and ¼ cup sprouted spelt flour (instead of regular flour) with ¾ cup almond meal. When I added the custard mix to the pan, the apples all rose to the top. Into oven at 10:10 AM. Checked after 55 minutes; one side of the cake had raised off the bottom of the pan; all was browning nicely but the very center was not quite done. Checked again after 60 minutes in oven; done, at 11:10 AM. Removed to rack to cool, then gently pushed down the high-side with a spatula so that it is more level. Result: I think I could have baked it a couple minutes more because it kinda falls apart easily; also perhaps I should have used a little less milk (since I used spelt flour), perhaps 1 – 3 tsp less. Or increase the amount of spelt flour. The apples mostly stayed at the top, just under the almonds, but that’s OK. It tastes just as wonderful as the previous batch.

1/10/20: I’d intended to use sprouted whole wheat pastry flour for this test, but I’m out; so I’m using sprouted spelt flour again, along with almond meal. For apples: 1 golden delicious and ½ honeycrisp. Followed instructions using the stevia and honey option in the custard, and Rapadura sugar on the 10″ pan bottom, and sliced almonds on top. Used slightly less milk/cream because spelt flour needs less added moisture. Into oven at 12:13 PM; out at 1:13 PM; nicely firm in center and almonds just beginning to brown. Result: So beautiful; see photo above. Apples floated to top as before, and it shrank in height as it cooled, as before. Has good texture (reduction in amount of milk/cream was just right). It tastes delicious; apples have pretty much melded with the custard/cake, as before.