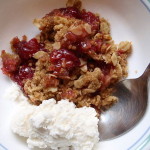 There is nothing like a fruit crisp as dessert, any time of the year; simply use whatever fruit is in season:  apples, pears, peaches, nectarines, berries, or even a combination of these.  I don’t like my crisp too sweet, as the sweetness takes away from the pleasant tartness of the fruit.

I love the addition of ginger and pecans to this crisp. And I provide notes for a gluten free version.

This recipe is adapted from Fine Cooking.com

I have MacIntosh apple and Bartlett pear trees in my yard, which are great in this dessert. You can also use Braeburn or Cortland apples, and Anjou pears.

While this version does not use a presoaked crumble, you can use Spelt-Yogurt Crumble  (on Basic Apple Crisp recipe page), using crispy pecans, and ground ginger instead of cinnamon & nutmeg.

Applejack is a “sweet alcoholic beverage made from apples. The drink was originally derived from apple brandy — possibly the French version, called calvados. In modern times, though, the beverage is essentially distilled or concentrated hard cider.” (2)

9/29/21: Just finished picking all my Bartlett pears, and my Macintosh apples are ready to pick, so I decided to give this recipe a try. I will not pre-soak the pecans, due to lack of time. For the flour in the topping, I will use half spelt and half almond meal; for the sweetener in the fruit filling, I will use stevia extract powder. Can’t find applejack, so will use apple cider. Otherwise as written.