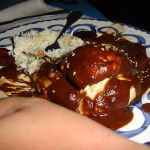 I have loved mole sauce ever since I discovered it at a new restaurant in my old Portland neighborhood, in the early 1990s: Santa Fe Restaurant. In general I don’t eat much Mexican food, but I do love Chicken Mole Enchiladas with Red Chile Sauce.

Tostadas are a salad served on or in a tortilla.  In restaurants, they are typically served in a deep fried tortilla shaped into a bowl, but traditionally, the tortilla is served flat. Although I rarely eat tostadas, I just might try this recipe, so have adapted it here for ingredient versions I prefer. I have not yet tested this recipe.

I came across this recipe in the July 2009 issue of Better Homes and Gardens (1), and it sounded so good….until I got to the ingredient list for the Quick Mole Sauce.  It includes 1 cup of commercial barbecue sauce (which is typically loaded with HFCS)!  So now the challenge is on, for me to develop my own version of barbecue sauce, so I can test this recipe as written.  In the meantime, I will use one of my chicken mole sauce recipes on this site, or use their original recipe included below. (photos of eggplant and summer squash from wikipedia).

Mole traditionally is made with dark, unsweetened cocoa, which is quite bitter, but adds wonderful flavor when cooked in a sauce like mole.

If you’re not interested in vegetarian tostada, you could add cooked, shredded chicken meat instead of, or in addition to one or more veggies. (see Baked Chicken for Cubing or Shredding).

The original recipe serves 8, but I’ve modified it to serve 4. Not yet tested.

This is my adaptation of the original Quick Mole Sauce that came with the tostada recipe; original makes 1½ cups sauce, but I’ve halved it to make ¾ cup sauce. My thought is that the best substitute for the barbecue sauce would be red chili sauce. Not yet tested.

The original recipe also notes hotness; I’ve adapted the amounts to a half-recipe as follows: