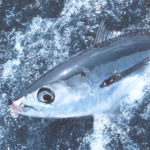 I don’t eat a lot of tuna and other large game fish, primarily because they have high levels of mercury, and I already have more than enough of that in my body. But once in a while, I indulge.

This recipe is an adaptation of Steak au Poivre (Pepper-Steak), which is one of my fav preparations of beef steak.

This recipe is adapted from Good Housekeeping magazine, 2008 (1), and serves 4; I’ve adapted it for 1 serving.  The lentils are a nice flavor with the tuna