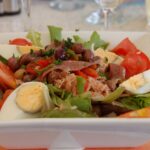 Not your Mother’s Picnic Potato Salad

I’ve never been fond of traditional American Potato Salad; you know, the kind with hard boiled eggs and creamy mayonnaise dressing.  I think its because as I child, I didn’t like the texture of mayo.  And to this day I don’t like the commercial stuff (Best Foods, Miracle Whip, Hellman’s etc.), but can enjoy a good fresh homemade mayo or good quality Organic Avo-Mayo.

So one 1979 day I was walking around the Fifth Street Market in Eugene Oregon, shopping for a gift.  I was feeling hungry as I walked past a small French-style cafe, and noticed an interesting looking salad that had just been set out. The decorative sign card said “Nicoise” and I just had to give it a try.  Chock full of potatoes and other veggies along with hard boiled eggs, Greek olives and a  hint of anchovy, it was dressed not with mayo but with a vinegar and oil type dressing.  And I’ve been hooked ever since.

This is my own recipe, based on that salad at Eugene’s Fifth Street Market. Serves 4 – 6 as a main dish.  For another version of this wonderful French salad, see Viking River Cruises: Salade Niçoise (1).

Arranged in layers, this salad makes a spectacular presentation; great for parties or luncheons.  It sounds difficult, but it isn’t really, though it does take a bit of time to prepare all the ingredients.  And it is so worth the effort.  Serve it in your prettiest large bowl.

I believe that when this salad originated in the Provence region of France, it was made with anchovies and tuna, both of which were abundant in the Mediterranean.  In America, where many people make faces at the salty anchovy, this salad is usually made just with tuna.  My recipe includes both:  grilled tuna in the salad, and anchovy paste in the dressing.  If you want to make this vegetarian, you can omit both, but the taste just won’t be authentic without at least the anchovy.

July 2011: I had some grilled wild sockeye salmon to use up so I made this salad with salmon instead of tuna; superb! It’s the dressing that makes this salad (with anchovy paste).

For the olives, you must use brined olives, not canned. In many markets, several varieties of brined olives are in glass containers at a table; you scoop out what you want into a container. For this salad, green brined olives are preferred, but if this is not available, Greek kalamatas, which are a black olive, are available in a refrigerator section of most grocers. Or better yet, a green and black brined Greek olive mix. Its best to select pitted versions, but if you cannot find those, forewarn your guests about the pits.

* An alternate way of using the eggs is to slice them in wedges and arrange with the tomatoes in two large rings around the outside of the salad after all other ingredients have been layered.

Make as above, but use hot-smoked (kippered) salmon, or cooked, fresh wild-caught salmon instead of tuna.