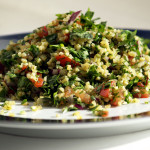 I first had Tabouli at one of Portland’s many Lebanese restaurants, and was hooked. I started making it at home based on the tastes I’d noted in the restaurants’ versions. But I’ve since lost that recipe, so I’m starting over. There are no Lebanese restaurants here in NW Montana, so I went online, and adapted the two best recipes I found.

The basic ingredients are bulgur (sprouted or roasted cracked wheat, spelt or farro), onion, parsley, tomato, and a simple Mediterranean dressing. Recipes vary by relative amounts of the ingredients, by the herbs and spices in the dressing, and by additional ingredients.

All herbs and veggies should be organic or grown without pesticides, and should be very fresh.  Grown in your own garden is always best.

You can use bulgur made from wheat, kamut or spelt; however, I’m not sure how much water to use, to soften spelt bulgur (since spelt is water soluble, less should be needed), but after it has absorbed all it can, you can drain off what remains.  I recommend using fine (as opposed to coarse) bulgur, if you can find it.  Tabouli can also be made with couscous (a type of pasta) or quinoa (a grain-like seed that has a bulgur-like texture after cooking). Couscous is the least nutritious choice; quinoa is best if sprouted before cooking; bulgur is best if sprouted before cracking.

This version, adapted from The Vegetarian Times Cookbook (1), serves 2 or more. Parsley, mint and onion can be chopped in advance, and stored in refrigerator; tomatoes should be freshly chopped.  Mix salad and dressing right before serving.

Testing 5/9/09:  Delicious, but I used the original amount of 1 tsp sea salt in the dressing; it is just a tad salty  Next time, I’d start with ½ tsp and add more if necessary. Also, I used grape tomatoes, because they were the only ripe tomatoes I could find; they were perfect in the salad.  I only had to halve or quarter them (and removed the seeds).

This version, with video, is adapted from DedeMed (2), and serves 4 or more. The ratio of parsley to burger is much greater for this version, than the previous one; otherwise they are very similar

Parsley, mint and onion can be chopped in advance, and stored in refrigerator; tomatoes should be freshly chopped.  Mix salad and dressing right before serving.

Assembly or Serving ideas, for Tabouli