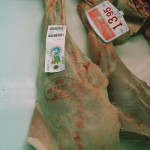 Leg of Lamb and Lamb Rack

Tabouli (tabbouleh) is a very popular Middle-Eastern salad, typically made with bulgur, parsley, mint,  onion and tomatoes with a simple dressing of olive oil and lemon juice. Adding lamb and/or garbanzos (chick peas), as in this recipe, provides protein and additional flavor. The method seems tedious, as you make a marinade for the lamb, finely chop the parsley and tomatoes for the tabouli, sprout and then cook the chick peas, and make the dressing, but it is well worth the effort.

This recipe is adapted from Epicurious (3).  Original recipe serves 20; I cut this down to 4 generous servings. It makes a gorgeous presentation.

I prefer more parsley than the small amount in the original recipe, and less mint (my preference is listed first; the original is in parenthesis). 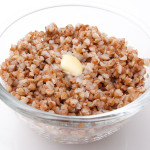 You can use bulgur made from wheat or kamut.  If you’re avoiding wheat or gluten, try kasha (buckwheat), which is cooked slightly differently – use 2 cups water/broth for 1/2 cup kasha; bring water to boil, add kasha, when resumes boil, reduce to simmer and cook 20 minutes (per FamilyOven.com (4)). Or sprouted quinoa, but that would not be authentic in this dish. (Photo, left, from Wikimedia Commons)

You can use canned chick-peas (garbanzos), but I prefer to sprout and cook my own. I make up a bigger batch, save out what I need for the recipe, and freeze the rest for future use).

This salad is easy to prepare and the taste is rewarding. Excellent.

NOTE: If lamb or red meat in general is not your thing, try this with chicken; see Chicken Variation below

Make as written for lamb, but using chicken, instead:

Brine chicken for 30 minutes, rinse and pat dry. Brush with a bit of the Mediterranean dressing (above), adding some fresh oregano and marinate in the fridge for at least 30 minutes before grilling.

After grilling, cut into cubes or strips and serve on top of the salad with Lebneh.

Testing 8/5/11: Made half recipe (2 servings) with leg of lamb steak; after tasting Tabouli, not enough parsley so I doubled amount – much better (recipe amounts updated). Also used only 1 Tbsp minced spearmint leaves because I’m not fond of spearmint. But the flavor is actually good in this dish; I could have used 2 Tbsp. The half-recipe of dressing wasn’t enough so I made another half-recipe; used some of it to brush on the lamb, some in the salad, and reserved the remainder (will use for something else if don’t need it on the tabouli); I doubled the ingredients in recipe, based on this testing. Grilled the lamb to rare, then cut into cubes to serve on top of the salad at room temperature. Lebneh is an excellent addition (I tried some with, some without), The toasted sesame adds a nice flavor.