Trans fats are now generally accepted to be toxic for human consumption.  This is because in their attempt to behave like their bio-active cis counterparts, they fail miserably, poisoning essential metabolic processes, and leading to many deadly consequences.

NOTE: This list was made before trans fats were banned from foods in 2018 (unless the level was less than 5% per serving, to protect foods that contain natural trans-fat foods). However, it is still a good idea to avoid foods in this list because they have other negative issues, such as GMO and/or too much sugar/starch.

The following categories of commercial foods likely contain trans fats (1,2). Read labels. [Refer to my Good Fats for Cooking and Good (Healthful) vs Bad (Not-Healthful) Fats and Oils essays for more on how to avoid hydrogenated and partially-hydrogenated fats for home cooking.]

Read labels; if any of the following are in the list of ingredients, the item likely contains trans fats, even if the label says “Trans Fat Free” or “Trans Fats 0%” (refer to “When is a Fat Not a Fat” section below, and to Chemically Altered Fats for more on this deception):

DL Dewey (4) provides list of food manufacturers that do not use trans fats (nor mono-diglycerides, a new name for trans fats; however, many of them use HFCS which is made with GMO bacteria). As of this writing, the list includes (4):

In addition, many natural foods are made with butter or coconut oil instead of poly-unsaturated vegetable shortening, and of course, you can make these foods yourself “from scratch” with natural ingredients.

What is a Trans Fat?

Before getting into that sticky wicket, I refer you to my articles: About Fats, an Introduction and Fats & FattyAcids.

Fats and fatty acids are substances that are not soluble in water. Fatty acids are comprised of a hydrocarbon chain of 2 or more carbons, with a carboxyl (acidic) group at one end. That carboxyl group may be attached tony of the following:

In nature, fatty acids are usually bound to something else to form:

‘*NOTE: Triglycerides are what is commonly called “fat,”  as that is the form in which they are found in the stored fat of plants and animals. Mono- and di-glycerides are not normally present in stored fat, but may be present in lipoprotein particles and within cells.  They are also used industrially in foods, as emulsifiers and shortening.

Fats are of vital importance to the health of the individual; for example, they:

In chemically altered fatty acids, the chemical process creates two isomers (geometric configurations) for each double bond (but enzyme-controlled creation of fatty acids allows for only the “cis” configuration):

In the early 1900s, scientists discovered they could alter the unsaturated fatty acids by flushing with hydrogen, in the presence of a metal catalyst, under high heat and pressure.  They called this industrial process “hydrogenation,” and they assumed that they had fully saturated the hydrocarbon chains by adding two hydrogens at each double bond.  This was a logical conclusion, since the altered fat was solid at room temperature, just like saturated fats.  The first commercial fat of this type was called “Crisco,” in 1911. (3)

By the 1920s, it was recognized that the hydrogenated fats were not the same as saturated fats, but were not aware of what was responsible for the difference.

Eventually, it was discovered that the double bonds were still present after the hydrogenation process.  Instead, what had changed in the altered fat was a shifting of the hydrogens from the cis to the trans configuration.  This was considered a stroke of luck, because the fats remained unsaturated.  They renamed this industrial process “partial hydrogenation.” 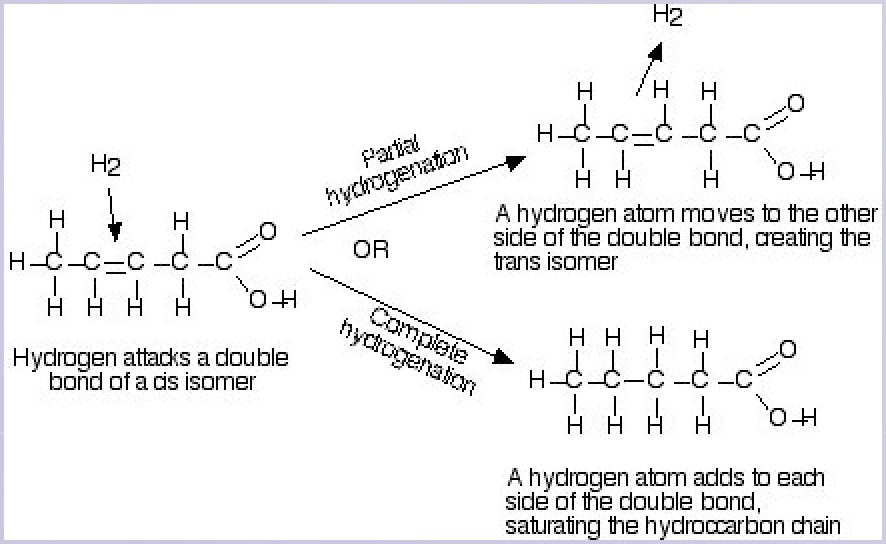 The libelous campaign against saturated animal fats started because consumers were not warming to the inexpensively produced hydrogenated fats, and the manufacturers needed to create a market.  Still, food manufacturers (especially fast food chains) were not keen on these new fats until they realized the fats had a longer shelf life than natural fats like butter and lard.

As early as 1956, there were suggestions in the scientific literature that partially-hydrogenated fats could be a cause of the large increase in coronary artery disease. Instead of alerting the general public, however, science and industry conspired to keep this knowledge a secret.  Even though these chemically altered fats are not natural and have no known benefit to humans, they were pushed upon an unsuspecting public as healthful and modern, by industry and later by the FDA.

But by the 1990s that it became obvious something was not good about the partially-hydrogenated fats.  Serious health problems (diabetes, heart attack, stroke) were observed in individuals who consumed the altered fats, mostly in the form of margarine and Crisco.  But nothing was done about it for more than a decade.

Meanwhile, the medical industry continued to support the claim that saturated animal fats are bad for you, despite significant scientific evidence to the contrary. (See my article, Saturated Fats: A Bad Rap for more on this).

Then, a few years ago, the problems with trans fats became general public knowledge, and Trans Fat content was added to food labels.

In 2015, the FDA determined that partially hydrogenated oils are no longer “generally recognized as safe” (GRAS) in human food and took steps to restrict its use; it was determined artificially-produced trans fats must be removed from all food products by June 2018

[NOTE:  Trans fatty acids do occur in nature, but at very low levels, and in very specific configurations, made, not by hydrogenation, but by enzyme-controlled processes, for a specific biological purpose.  These account for 2-5% of total fat. Examples of natural trans fats are conjugated linoleic acid (CLA) and vaccenic acid found in ruminant animals; i.e., cows and sheep. 3]

When Is a Fat Not a Fat?

Food manufacturers are very clever.  They have figured out how they can continue to use their toxic chemically altered fats in foods and get away with it.  You CANNOT TRUST FOOD LABELING. For more on this subject,  refer to my article Chemically-Altered Fats.