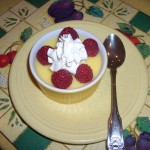 Creamy pudding with berries and cream

Nothing beats a good soft, creamy pudding as comfort food. Additionally, vanilla pudding is a base for several cream pies including banana and coconut, which is my primary reason for making it.

Because these puddings typically contain a lot of sugar, they should not be indulged frequently. Except for special occasions, I prefer to use stevia or a mixture of stevia and sugar, honey or maple syrup to sweeten creamy puddings.

The base for creamy puddings is a stove-top custard made with milk/cream and eggs. Chocolate goes well with coconut, and substituting the cream with coconut milk is an interesting twist. However, I don’t recommend replacing the milk with coconut milk, as the protein in dairy milk is important for the texture of the custard.

I prefer to cook stove-top creamy puddings in a double boiler so the milk doesn’t scorch. To use a double boiler, add water to lower portion, not so much that the upper portion gets wet on the bottom when set on top. Bring water to a boil. Add ingredients to upper portion, then set over the boiling water. Stir mixture frequently, and check water level in lower portion so that it doesn’t boil dry. Pudding may never come to a full boil but will come close, and the pudding will be very thick.

You can also cook pudding in a heavy-bottomed saucepan and stir constantly so milk doesn’t scorch, until pudding comes to a full boil. Remove from heat and continue to stir for a few minutes.

The original recipe calls for ¾ cup sugar, but I prefer to use stevia with a bit of maple syrup:

This recipe doesn’t use a double boiler, but I highly recommend using one; however, the cooking time will be greater. See above for instructions.

* Note, if you don’t want to use stevia and honey/maple syrup, use ¾ cup Rapadura or white cane sugar to avoid GMOs.