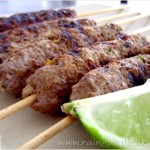 This is just one of my many favorite Lebanese foods that I learned to love at several Lebanese restaurants in Portland OR, where I used to live, including Nicholas’ Restaurant and Al-Amir).

Traditionally Kafta is made with lamb, but here in America, it is more-often made with beef. However, lamb is the better choice unless you raise your own beef or hunt your own venison, because commercial beef is fed grain/soy feed that is not natural to their diet and is likely GMO. Sheep and buffalo insist on pasture. Mixtures of lamb and buffalo, or lamb and venison are other great options.

I make up a big batch and then freeze most of the kafta for a future quick dinner. I love to serve this with Lebanese Spinach Pies. 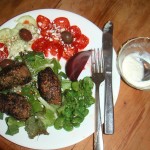 This recipe, for those wonderful lamb burgers found throughout the Middle East, is based upon a recipe from one of my favorite Lebanese restaurants in Portland (Al Amir), and versions in Epicurious (1)  using lamb; All Recipes (2) using beef; and Fine Cooking (7). See also Fine Cooking’s page on paprika (8) for a good discussion of the different types of this spice. Paprika’s flavor only comes out when mixed with fat – another reason not to use low-fat meat, or to add olive oil to the mix.

My Lebanese version of Kafta (or Kofta), is seasoned with allspice, and may include steamed bulgur added for bulk (similar to adding bread crumbs to meat loaf); I include bulgur as an optional ingredient, but highly recommend it (unless you have gluten issues). The mix is then shaped into balls or ovals and fried, baked, or grilled on skewers. It can then be sliced for use in sandwiches after cooking.

I’ve added some optional herbs & spices (7) that I add when using lamb and/or venison, as they go well with the ‘wild’ flavor of these meats.

A Greek restaurant in Portland used to add chopped blueberries to the recipe when they shaped the kafta as thick, round and flat burgers. Mmm.

Testing 5/6/12: Made as written using whole wheat bulgur and allspice (no coriander, cinnamon or oregano), and shaped into 8 long ovals (4 per serving). Pan-grilled about 12 minutes (3 min for each of 4 sides). Served with Tsatziki, Horiatiki salad, whole wheat pita (commercially made), half of a Lebanese Spinach Pie and ¼ of a cooked beet. The only thing lacking in this wonderfully delicious dinner, was a glass of retsina.

Testing 6/18/12: Made again as before but used the oregano and ¼ tsp each allspice and coriander; no cinnamon. Pan-grilled again, and served with a salad of spinach, tomatoes, cucumber, onion and sliced brined Greek olives, with Lebneh sauce. Also a whole wheat pita. As before, excellent!